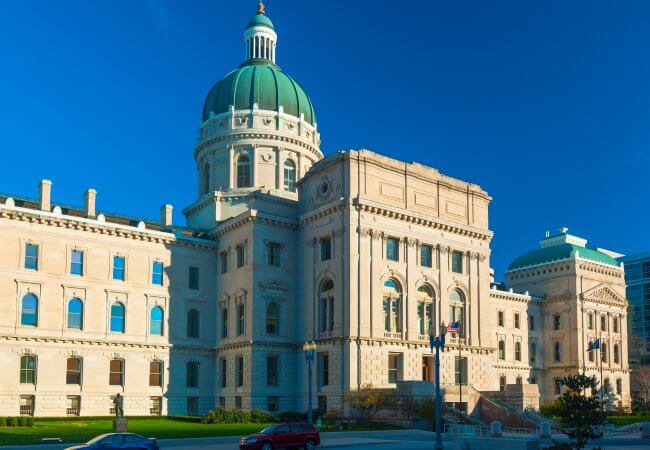 The state capitol building of Indiana, located in Indianapolis.

Thanks to a coalition of organizations that have coordinated efforts for years, Hoosiers and those in nearby states can now more readily find health care. That’s because Indiana’s registered nurses and licensed practical nurses can convert their home state licenses to a multistate license that allows them to practice in 33 other states as well. That’s right: On July 1, Indiana became the 34th state to join the Nurse Licensure Compact (NLC).

AARP Indiana and the state’s Action Coalition, the Indiana Center for Nursing, were among forces behind the success.

Ambre Marr, state legislative director for AARP Indiana, says that Indiana’s being an NLC compact state will help quickly expand access to health care for Hoosiers and consumers in neighboring states, particularly in rural and underserved communities. Echoing that is Indiana Center for Nursing CEO Kimberly Harper, MS, RN, FAAN, who notes as well that this cuts some red tape for nurses, who can work across state lines without obtaining duplicate licensure.

Marr points to two state legislators who ushered the bill to this point: State Rep. Edward Clere (R) and Sen. Andy Zay (R) introduced bills in 2019. Their support included helping address questions from other lawmakers about what being a compact state would mean, such as which state would have jurisdiction and how states could maintain their own standards.

The National Council of State Boards of Nursing (NCSBN), which coordinates the NLC, helped allay such concerns years ago when it introduced an “enhanced” NLC. The update to the original 2001 compact set requirements and aligned standards among states. For instance, nurses seeking a multistate license must submit to a federal criminal background check. They also need to have a Social Security number, have graduated from an approved education program, and have passed the NCLEX.

Southern Indiana’s Hosparus Health, part of the coalition pushing for the compact status, is an example of how the NLC improves health care for consumers, nurses, and employers. Hosparus, which provides hospice and palliative care, operates in Kentucky, too (also a compact state). Indiana’s being part of the NLC means that RNs and LPNs can live in either state and provide care in all facilities.

AARP’s Marr notes more other ways the multistate license helps: Employers save on the costs they formerly shared with nurses for multiple nursing licenses. These savings can be reinvested into the health care system and drive down costs for consumers—probably just one reason that chambers of commerce in cities in both Indiana and Kentucky were also partners in Indiana’s obtaining NLC status.

The NLC opens the door to telehealth options: Indiana’s RNs and LPNs nurses who hold a multistate license can provide care over the phone, online, and in person in compact states. A patient with a chronic condition living in a rural part of a state, for example, can receive care from more providers across multiple states without the need to drive for hours each time.

Compact agreements among states is also a boon in time of disaster, so that nurses can help in areas hit by hurricanes or other emergencies that demand an influx of help from outside.

Indeed, the pandemic has brought home the need for collaboration among states to ease the burden on health care providers and patients of states hit hard. NCSBN has posted stories about those states whose compact agreements meant that, when COVID-19 hit, they were ready to work with nurses from other states. Many non-compact states have put into place emergency orders that allow out-of-state providers to administer care. NCSBN has posted the state-by-state response to COVID-19 to better meet workforce shortages.

Harper is grateful for all of the partners who helped make this happen, and thrilled that it’s now law: “Working collaboratively with the Indiana State Board of Nursing/Indiana Professional Licensing Agency, we at the Indiana Center for Nursing and Action Coalition have been extremely supportive of bringing the compact to Indiana. There was so much change that had to take place in the Indiana Professional Licensing Agency to make this work—but we finally made it.”