At 4 million strong, nurses are woven into the fabric of our communities unlike any other care provider. Over the past decade, three influential organizations have taken steps to better position these highly skilled professionals to improve health and health equity in America. AARP Foundation, AARP, and the Robert Wood Johnson Foundation (RWJF) fund both the Center to Champion Nursing in America, and the Future of Nursing: Campaign for Action. View our timeline below:

AARP launches the Center to Champion Nursing in America (CCNA), an initiative of AARP Foundation, AARP, and the Robert Wood Johnson Foundation (RWJF).

AARP Foundation, AARP, and RWJF create the Future of Nursing: Campaign for Action to implement the IOM’s recommendations. The Campaign starts establishing its national network, which eventually comprise state Action Coalitions in 50 states plus DC, and stakeholders from the business, health and nursing worlds.

The Future of Nursing: Campaign for Action launches its first dashboard, measuring the following:

The Medicare Graduate Nursing Education Demonstration Project, designed to increase the number of advanced practice nurses, begins the first of its four years. This $200 million pilot, part of the Patient Protection and Affordable Care Act of 2010, was the first time in Medicare history that CMS identified funding specifically for graduate nursing education.

Action Coalitions receiving RWJF funds to advance their work on IOM recommendations implement plans aimed at diversifying the nursing work force, with the ultimate goal that nursing looks like the communities it serves.

AARP and RWJF establish the Nurses on Boards Coalition, with its goal of improving the health of communities and the nation by getting 10,000 nurses on boards by 2020.

Connecticut and Minnesota fully modernize their scope of practice laws for nurse practitioners.

The IOM assesses progress made on its 2010 Future of Nursing report, noting successes and also urging greater emphasis on diversity.

The number of nurses graduating with a Bachelor of Science in Nursing (BSN) hits 53 percent, 4  percent more than when the Campaign began in 2010.

The Campaign adds the role nurses play in building a Culture of Health to the top of its agenda.

Maryland and Nebraska fully modernize their scope of practice laws for nurse practitioners.

The U.S. Department of Veterans Affairs lifts limits on most APRNs at VA facilities. Now nurses may treat patients regardless of state restrictions.

Two new indicators are added to the Campaign Dashboard. One measures diversity in nursing, while the other counts nurses serving in leadership positions.

The Campaign expands its focus to include health equity. The shift toward social determinants of health is part of ongoing efforts to emphasize inclusion and diversity in nursing.

The number of RN-to-BSN graduates more than triples between 2009 and 2017.

RWJF releases Catalysts for Change: Harnessing the Power of Nurses to Build Population Health in the 21st Century, documenting nursing’s role in the need to prevent illness, rather than simply treat it.

The U.S. Department of Veterans Affairs lifts limits on most APRNs at VA facilities. Now nurses may treat patients regardless of state restrictions.

The Campaign establishes the Nursing Innovations Fund awards for Action Coalitions or approved affiliated organizations with winning proposals to promote innovation and collaboration with new stakeholders. Awards are given again in 2019, 2020, and 2021.

The 2018 Nursing Innovations Fund awards go to projects that focused on innovative ideas to advance nursing and build a Culture of Health.

The Campaign starts its work on Population Health in Nursing. The project explored promising models of nursing education and practice related to improving population health. Through this project, the Campaign publishes three reports:

The Campaign teams with the U.S. Dept. of Health and Human Services Office of Minority Health and the White House Initiative on Historically Black Colleges and Universities to host mentor training programs. The goal is to increase the rates at which minority nursing students succeed, and become nurses.

The 2019 Nursing Innovations Fund awards go to Action Coalitions for new or ongoing work that addresses nursing’s role in building a Culture of Health and promoting health equity. The 2019 Innovations Fund award winners’ plans also demonstrate the importance of collaboration with diverse stakeholders.

The 2018 National Sample Survey of Registered Nurses (NSSRN) shows that RNs with a bachelor’s degree, or higher, in nursing grew from 50 percent in 2008 to 64 percent in 2018; the nursing workforce also became more diverse in that time.

The Campaign develops a Health Equity Toolkit that provides the tools, resources, and information that nurses, as well as Action Coalitions and their partners, need to help their communities by tackling the social determinants of health—conditions in which people are born, grow, live, work and age, including social and economic factors that have a great influence on people’s health.

California and Florida make substantial improvements in their scope of practice laws for nurse practitioners.

The 2020 Nursing Innovations Fund awards go to Action Coalitions for new or ongoing work that strengthens nursing’s role in building a Culture of Health and promotes health equity. All projects are designed to address policies that impact the many different social, economic and environmental factors that shape our health, and that will lead to greater health equity for all.

Massachusetts made permanent its COVID- 19 pandemic response by fully modernizing its scope of practice law for nurse practitioners.

The Campaign, in partnership with AARP’s Office of Diversity, Equity and Inclusion and Thought Leadership teams, holds a series of virtual convenings, the Health Equity Action Forums, with the goal of engaging a range of stakeholders, including consumer, business and health care organizations, on improving our nation’s health equity through a more diverse nursing work force.

The Campaign celebrates 10 years of nursing progress and looks ahead.

The National Academy of Medicine releases the future of nursing 2020-2030 report, The Future of Nursing 2020-2030: Charting a Path to Achieve Health Equity, a blueprint for the nursing profession to help improve health equity and reduce health disparities for the next decade. 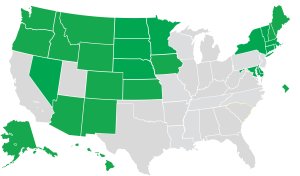 IMPROVING ACCESS TO CARE About 94 million people in 26 states and the District of Columbia now have direct access to nurse practitioners who can provide full care. The green depicts states with full practice authority for nurse practitioners.