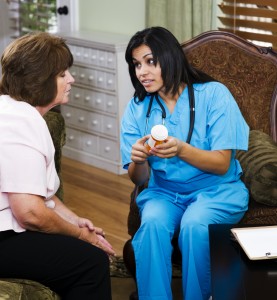 Advanced practice registered nurses (APRNs), such as nurse practitioners, can help meet the primary health care needs of consumers, including the millions of new people enrolled under the Affordable Care Act and those living in rural areas. But outdated state scope of practice laws are keeping nurses from practicing to the full extent of their education and training, making it harder for patients to get the care they need.

Often these state laws require that APRNs work with a collaborating physician who will sign off on their prescriptions or have an agreement with a physician to co-sign basic orders, such as for x-rays, physical therapy, or referrals. These laws and regulations restrict the care APRNs can provide, particularly in underserved rural areas where no physicians may practice. Right now, only 18 states and the District of Columbia allow nurse practitioners to practice to the full extent of their education and training.

But through the efforts of the Future of Nursing: Campaign for Action’s state Action Coalitions and other key partners, many states are working to remove these barriers, a key recommendation of the 2010 landmark Institute of Medicine report, The Future of Nursing: Leading Change, Advancing Health.

“The tide is turning. States are realizing that the time to act is now,” said Susan Reinhard, RN, PhD, FAAN, senior vice president and director, AARP Public Policy Institute and chief strategist, Center to Champion Nursing in America, which coordinates the Campaign for Action. “In order to meet the demand for high-quality care, we must ensure that all clinicians are able to do everything they were trained to do—regardless of which state they live in.”

In 2009, Hawaii legislators revised the nurse practice act to meet the growing need for primary health care in rural and underserved areas. Under the new law, nurse practitioners could, for the first time, prescribe medicines without the co-signature of a physician. Nurse practitioners could also establish their own practices, be designated as a primary care provider, and sign the paperwork required to order and make referrals to care.

“This legislation was a solution to the shortage of primary care providers—a worsening problem in our state” said Mary Boland, RN, DrPH, dean, School of Nursing and Dental Hygiene at the University of Hawaii at Manoa and co-lead of the Hawaii Action Coalition. “We have a documented shortage of primary care providers on all the islands, and the problem is particularly severe on the rural islands with smaller populations.”

Since the passage of the law, the number of nurse practitioners with prescriptive authority in Hawaii has nearly doubled—from 193 in 2009 to 383 in 2013—helping increase consumers’ access to care.

North Dakota, meanwhile, has struggled with a severe shortage of primary care providers, particularly in the rural areas, which have seen a tremendous influx of oil and gas workers in recent years. A key barrier to providing care to these and other rural residents was a requirement that nurse practitioners had to have a collaborative agreement with a physician to prescribe medications. For such nurses who wished to work in rural areas where there were no physicians nearby, this was a difficult hurdle to overcome.

In part as a response to the shortage of primary care practitioners, North Dakota’s governor enacted a 2011 law that allowed APRNs to prescribe medications without restrictive physician oversight. Similar to Hawaii, North Dakota has seen an increase in the number of APRNs since the law went into effect, from 650 in 2011 to more than 1,000 today, according to Constance B. Kalanek, PhD, executive director of the North Dakota Board of Nursing and member of the North Dakota Action Coalition.

An even newer 2013 law passed in Nevada allows the majority of APRNs to prescribe, assess, diagnose, treat, and make appropriate referrals to other providers without restrictive physician oversight. During legislative hearings, ARPNs testified that they had to pay collaborating physicians $2,000 to $3,000 a month to work with them, according to Debra Scott, MSN, RN, FRE, executive director of the Nevada State Board of Nursing. Partly as a result, few nurse practitioners were working in underserved rural areas, which meant that some patients had to drive 1 to 5 hours for care, Scott said.

Even though the law is still new, Scott said she is already seeing an increase in the numbers of APRNs moving to the state.

“Research shows that patients receive the same quality or better quality care from APRNs as they do from physicians,” she said. “It’s been a wonderful way to recruit APRNs to Nevada and meet the needs of people in rural areas, as well as those who are now covered by health insurance.”

This story appeared in the March 2014 issue of Advancing Health: News from the Campaign for Action.