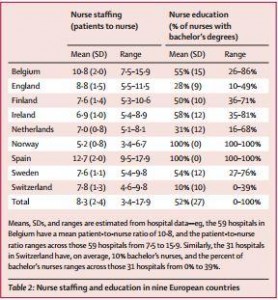 A new European study published in The Lancet sheds more light on the importance of nurses having a bachelor’s degree and manageable workload. According to the study, patients who underwent surgical procedures were more likely to die if they were treated in hospitals where nurses were caring for more patients and fewer nurses held bachelor’s degrees.

The study found an increase in a nurses’ workload by one patient increased the likelihood of an inpatient dying within 30 days of admission by 7%, and every 10% increase in bachelor’s degree nurses was associated with a decrease in this likelihood by 7%. The study observed 300 hospitals in nine European countries (Belgium, England, Finland, Ireland, the Netherlands, Norway, Spain, Sweden, and Switzerland) by using data from hospital administrative sources and surveys of 26,153 bedside care professional nurses from 2009–2010.

The study concluded that, “nurse staffing cuts to save money might adversely affect patient outcomes. An increased emphasis on bachelor’s education for nurses could reduce preventable hospital deaths.”

“Our findings emphasize the risk to patients that could emerge in response to nurse staffing cuts under recent austerity measures, and suggest that an increased emphasis on bachelor’s education for nurses could reduce hospital deaths,” said lead researcher Linda Aiken, PhD, FAAN, FRCN, RN, Claire M. Fagin Leadership Professor in Nursing, Professor of Sociology, and Director of the Center for Health Outcomes and Policy Research at the University of Pennsylvania.