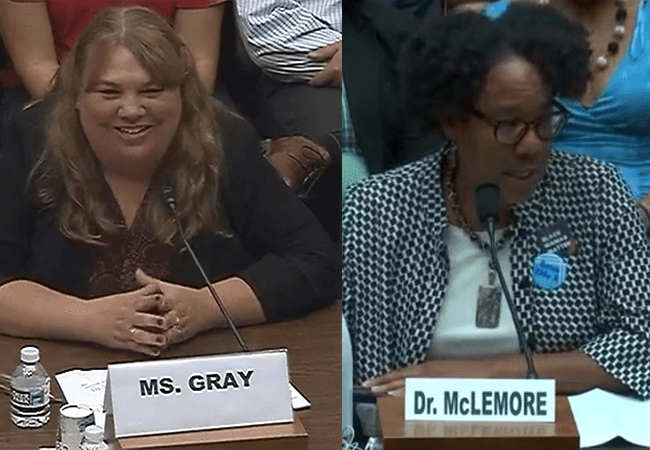 Two nurses who have been recognized by the Campaign for Action and the Robert Wood Johnson Foundation took seats in U.S. House chambers on Wednesday, speaking to separate committees about two of the nation’s biggest issues of concern: opioid abuse, and Title X funds for family planning. Both were impassioned and precise in their statements and responses.

In a coincidence of timing, in sessions that started at precisely the same hour on June 19, Angela Gray, BSN, RN, of West Virginia and Monica McLemore, PhD, MPH, RN, of California, provided strong statements to committees seeking information from experts.

Gray was on a panel of five witnesses called on as part of a hearing held by the House Committee on Oversight and Reform examining why many patients and families in need of treatment are unable to obtain it.

McLemore, speaking in her role as incoming chair of the Sexual and Reproductive Health Section of the American Public Health Association, spoke at a hearing called “Protecting Title X and Safeguarding Quality Family Planning Care,” addressing the Subcommittee on Oversight and Investigations, part of the House Committee on Energy & Commerce. The committee sought testimony about proposed changes to the federal Title X family planning program. (A recording of the session, which took place over seven hours—including a recess—is archived here; McLemore’s testimony starts just after 2:58.)

Gray, nurse director of the Berkeley-Morgan County Board of Health, introduced herself as a front-line nurse. “My state is hemorrhaging,” she began: “Our state has the highest number of overdoses in the country.” In answering questions later in a session that lasted more than three hours, Gray spoke of the need to treat demand, rather than shaming those who are addicted: As a society, she said, “We don’t treat them as human beings. We keep people from getting care. We shame them.”

Gray also made clear at the top of her talk the impact that previous RWJF support had made on her: “I am one of 25 RWJF Public Health Nurse Leaders in the nation. Without the leadership training provided, and the investment made in me by RWJF, I wouldn’t be here today as an advocate for the people afflicted with addiction in my state.”

McLemore is a 2015 Campaign for Action Culture of Health Breakthrough Leader in Nursing, and was profiled by the Campaign in 2017. The Campaign is an initiative of AARP Foundation, AARP and RWJF.

The Campaign wrote about Gray’s fight to support her state in 2019.