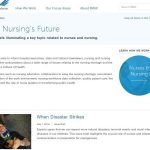 Charting Nursing’s Future has been providing information on key policy issues for the past 10 years, and highlights the important role nurses play in building a Culture of Health. In its September 2016 issue, the American Journal of Nursing praised Charting Nursing’s Future for its “wide range of topics of interest to nurses,” calling it “a great resource not only for nurses, but for policymakers, consumers, health care organizations, and educators.”

Charting Nursing’s Future highlights from 2016 include:

by Jacqueline B. Boulden