Nursing Movement Looks to Past to Change the Future

Campaign for Action takes cues from disability rights and other movements. 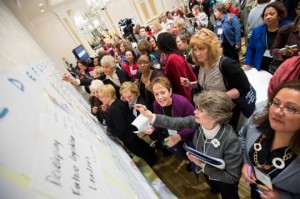 The leaders of the modern-day nursing movement are putting lessons from past social change movements into play as they work to overhaul the nursing profession to improve health and health care.

Susan B. Hassmiller, PhD, RN, FAAN, and Susan Reinhard, PhD, RN, FAAN, oversee the Future of Nursing: Campaign for Action, a joint initiative of the Robert Wood Johnson Foundation (RWJF) and AARP to transform health care through nursing. In their work, they see echoes of other social change movements—and are borrowing lessons from successful movements of the past. Hassmiller is senior adviser for nursing at RWJF; Reinhard is senior vice president of the AARP Public Policy Institute and chief strategist at the Center to Champion Nursing in America.

Reinhard sees striking similarities between the Campaign for Action and the U.S. movement to integrate the elderly and people with disabilities into communities, rather than isolating them in institutions. The “community living” movement, she says, got a boost from Vietnam veterans who returned from service with disabilities and insisted on accommodations. They demanded supports Americans now take for granted, including buses with lifts, ramps into buildings, and curb “cuts” that facilitate mobility for people in wheelchairs. “They also affected public policy, winning state Medicaid waivers so families did not have to spend down their assets before becoming eligible for assistance,” Reinhard explained.

“Our entire society benefited from their work,” she added. “They changed norms and altered our thinking about what was possible, and nurses are beginning to do the same. The Campaign for Action is changing nurses’ views about themselves, as well as society’s views about nurses. We need more nurses to recognize themselves as potential agents of change. We have a good beginning, but we need to build on our work. Everyone will benefit when we do.”

Social change movements have shaped the United States. From the anti-tax movement of the 1700s that led to the Boston Tea Party, to the abolition movement that ended slavery, to suffrage, civil rights, women’s rights, labor, environmental, gay rights and other social change movements, advocates willing to challenge norms and policies have changed the American way of life.

Hassmiller and Reinhard hope to add the Campaign for Action to transform nursing to that list by applying lessons from the past to today. Like other social change movements, the Campaign is bringing sustained, collective action to efforts to advance specific reforms and change cultural norms.

RWJF’s Hassmiller sees the Campaign for Action as continuing the proud legacy of nurse pioneers like Florence Nightingale and Lillian Wald, who overcame formidable obstacles to change the culture and improve care. “Florence Nightingale was a master at engaging powerful allies, from the royal family to the military to health and science leaders, and Wald paid immense attention to reducing disparities and changing norms,” she said. “Both kept going despite resistance. They were far ahead of their time, advancing a Culture of Health.” The Campaign for Action, she said, aspires to the same kind of impact.

Echoes of the Women’s Rights Movement

Many people see gender-driven attitudes in the ways the predominantly female nursing profession has been treated in health care and the media. Examples include lower pay for advanced practice registered nurses than for physicians performing the same exact services, and paternalistic collaborations that require physicians to oversee work that nurses are trained to do, while the physicians receive significant monetary reimbursement for doing so.

Similarly, federal funding for nurse education lags behind funding for graduate medical education, despite the essential nature of nurses’ work; and many health reform decisions are made without input from nurses, who comprise both the largest health profession and the group of providers with the most contact with patients and families.

So too, the media’s depictions of nurses as assistants or handmaidens echo the ways other groups have been demeaned in popular culture in the United States.

One of the Campaign’s key solutions, Hassmiller said, is to emphasize that nurses must step into leadership roles to improve access to care: “Nothing is more important than the Campaign for Action’s work to advance nurse leaders. From public policy to industry to the military, we nurses have to take our place at the table and be ready to contribute when we get there.” And, she added, the nursing profession has an urgent imperative to diversify in terms of race and gender so that the profession more closely reflects the population it serves.

This story appeared in the October 2014 issue of Advancing Health: News from the Campaign for Action.