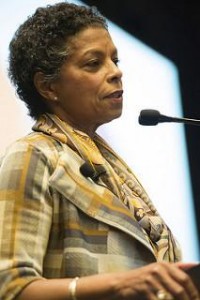 In December, the president and CEO of the Robert Wood Johnson Foundation made clear in a speech to hundreds of nurses, business leaders, policymakers, and funders that RWJF’s commitment to a Culture of Health includes an equally strong commitment to the Future of Nursing: Campaign for Action.

Interest was high among those at the Campaign’s Summit 2015 in Washington, D.C., to understand how the RWJF-supported movement ties in with the Campaign. Risa Lavizzo-Mourey, MD, MBA, was direct: “To build a Culture of Health, we need a vibrant nursing profession committed to making patients and communities healthier.”

Much of the Summit was spent deliberating and building on those words, as Campaign backers and advocates fleshed out plans and ideas about how nursing goes hand in hand with a Culture of Health. Toward the end of the second day, Susan B. Hassmiller, PhD, RN, FAAN, faced a crowd that was both thoughtful and motivated. Said Hassmiller, senior adviser for nursing at the Robert Wood Johnson Foundation and the director of the Campaign: “It’s clear that nursing has a great role to play in building a Culture of Health, and I think you can feel that. Action Coalitions, you have laid the groundwork for high-quality care in the 21st century.”

AARP Foundation, AARP, and RWJF started the Campaign to implement recommendations from the Institute of Medicine (IOM) on how the nation can best meet its health needs. Providing context for Lavizzo-Mourey’s remarks on December 9 was Victor J. Dzau, MD, president of the National Academy of Medicine, who spoke of the progress report that the IOM had just published on the Campaign’s first five years (see separate story).

The IOM recommendations for the future of nursing, said Lavizzo-Mourey, “are key building blocks for a Culture of Health,” as they are helping the nursing profession become the more powerful force the country needs.

The concept of a healthier world for all is “part of your DNA,” said Lavizzo-Mourey, and that will help the movement take hold: “Nurses work in all the places we need leadership if we are going to make our nation healthier—hospitals, schools, business, nonprofit organizations, even Congress.”

Lavizzo-Mourey described the four interconnected aspects of the Culture of Health—areas together known as the Action Framework—that lead to improved population health, well-being, and equity. Later, Action Coalitions talked about how much of their work already fits.

For one example in the first action area, making health a shared value, West Virginia referred to its partnership with the Healthy Kids and Families Coalition as that group expands its mission to end child poverty and inspire citizens to take steps to improve their community’s health.

Some of New York’s work falls in the second area, fostering cross-sector collaboration. Three members of the Action Coalition in the Finger Lakes Region are part of the health ministry at Rochester’s Genesee Baptist Church, where the minister welcomes them two Sundays a month to talk briefly about all aspects of health, be it a reminder to congregants to get their eyes checked or broader conversations about health disparities. The fourth Sunday, at the fellowship hall, they spread information about healthy eating.

The Texas Team talked about how its work matches the third action area, creating healthier, more equitable communities. The president of the Texas Health Institute serves on the coalition’s strategic advisory committee. However, only after the Culture of Health ideas started permeating the coalition’s work did coalition members think to request that a nurse be placed on the board of an institute whose work so well matched the vision.

The Campaign’s ongoing work to broaden scope of practice laws fits the fourth action area, strengthening the integration of health services and systems. Colorado is another example: To encourage nurses to become primary care providers in rural regions, that Action Coalition got funding to supports nurses’ becoming advanced practice registered nurses—thus improving access to care for their communities.

In closing, Lavizzo-Mourey urged: “See yourself as leaders in this Framework. Use your extraordinary skills and ability to get difficult things done. Join with others to build a Culture of Health in your workplace, your neighborhood, your community.”

This story appeared in the February 2016 issue of Advancing Health: News From the Campaign for Action.