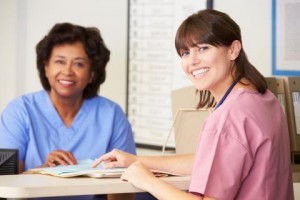 Nurses are playing key leadership roles in some states as consumers explore the new health insurance exchanges created by the Affordable Care Act.

In Idaho, Margaret Wainwright Henbest, RN, MSN, CPNP, executive director of the Idaho Alliance for Leaders in Nursing, is one of 19 officials—and the only nurse—on the board of Your Health Idaho, the health insurance exchange in the Gem State.

A former state lawmaker, Henbest was appointed to the position earlier this year after legislation creating the exchange was approved by the state legislature. She is also former co-lead of the Idaho Action Coalition which, like the other Action Coalitions, is working to transform the nursing profession and improve health and health care.

Action Coalitions are now in place in all 50 states and the District of Columbia, and are the driving force behind the Future of Nursing: Campaign for Action. One of the key goals of the Campaign is to develop more nurse leaders so they can play a significant role in the redesign of the nation’s health care system.

Henbest, for her part, is thrilled to represent her profession on the exchange. “I think it’s really important to have somebody who’s knowledgeable about the health care system and who also has a strong consumer focus,” she said. “Nurses are really pretty unique in their ability to do that. They understand consumer needs and the health care system in a sophisticated manner.”

Nurse leaders on exchanges serve another function—as role models for other nurses, said Deborah Gardner, PhD, RN, FNAP, immediate past executive director of the Hawaii State Center for Nursing and immediate past co-lead of the Hawaii Action Coalition. “When nurses lead in the policy arena, other nurses take notice and are exposed to the possibilities.”

Gardner sees that happening in Hawaii, where Coral Andrews, FACHE, MBA, RN, the former vice president of the Healthcare Association of Hawaii and a member of the Hawaii Action Coalition, is serving as executive director of the Hawaii insurance exchange.

The Hawaii Health Connector, in fact, is stocked with nurses. Clementina Ceria-Ulep, PhD, MSN, RN, an associate professor and department chair at the University of Hawaii at Manoa School of Nursing and Dental Hygiene, serves on the group’s board of directors, and another nurse is one of the group’s program specialists. Gardner, meanwhile, is working to educate consumers about the Hawaii exchange.

A background in nursing is a valuable commodity in health care reform, Andrews said. “Nurses are systems thinkers, educators, and consensus builders,” she said, noting that those skills have helped her garner broad stakeholder support for the Hawaii exchange. “Over the past 30 years, as a nurse, I have been exposed to diverse environments. I am able to leverage that and apply it in one environment focused on improving the health and well-being of our community.”

In Texas, the federal government is responsible for launching the state’s new insurance marketplace, but nurses are monitoring it and discussing opportunities to educate nurses and other health care professionals about the information available to them there, according to Alexia Green, PhD, RN, FAAN, a board member of the Texas Institute of Health Care Quality and Efficiency and co-lead of the “Texas Team,” the state’s Action Coalition.

In Idaho and Hawaii, Henbest and Andrews are devoting their energies to getting their respective exchanges up and running in time for applicants to enroll over the months following the Oct. 1 launch.

They expect to be able to put their expertise as nurses to good use. In Idaho, the inclusion of advanced practice registered nurses in provider networks, and payment and coverage for case management, care coordination, and patient education may come under consideration in the future, Henbest said.

Andrews also cited payment reform as an issue she may address as her exchange’s executive director, and anticipates a role for nurses in consumer education and outreach.

“Health literacy is critical to enabling consumers to be empowered in their own decision-making,” Andrews said. “Nurses as educators can play an important role in this area.”

This story appeared in the November 2013 issue of Advancing Health: News from the Campaign for Action.