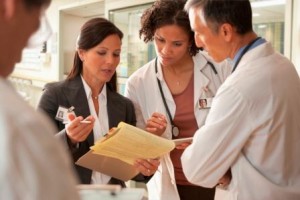 Kristy Reuss, PhD, RN, a board member at a community hospital in Colorado, immediately thought of how patient care could be adversely affected if a proposal put forth by senior management to close the rapid response team was implemented. The first and only nurse on the 16-member board, Reuss explained to her colleagues how rapid response teams quickly bring needed resources to a patient who has developed a life-threatening complication.

Deploying a rapid response team is one of six strategies that the Institute for Healthcare Improvement recommends to prevent avoidable deaths. It is designed to intervene when a patient’s condition starts to worsen but before he or she experiences cardiac arrest.

For Reuss, a faculty member at Colorado Mesa University in Grand Junction and a member of the Colorado Action Coalition, this incident epitomized why she pursued hospital board leadership.

“Board decisions often are made without considering the perspective of people who are in the trenches,” she said. “Nurses represent the voice of the patient advocate.”

Reuss stepped off the board in 2013 due to term limits. However, the hospital CEO asked for her input in choosing her successor to the board.

“The board saw the importance of having a nurse voice at the table,” she said. “They felt the need to replace me with another nurse.”

She suggested three people, all of whom had leadership experience in professional nursing organizations and community involvement. They chose a nurse with prior board experience with other community organizations.

The truth, however, is that few nurses serve on boards: the American Hospital Association estimates that nurses fill 6 percent of board seats, compared with 20 percent for physicians. A landmark Institute of Medicine report, The Future of Nursing: Leading Change, Advancing Health, called on nurses to take on greater leadership roles.

The Campaign, in partnership with 20 leading nursing organizations, has set an ambitious goal to place 10,000 nurses on boards by 2020.

Margaret Henbest, a nurse practitioner who was appointed by Idaho Governor Butch Otter to serve on the Idaho Health Insurance Exchange Board, believes that nurses “often don’t recognize what they bring to the table in terms of power and influence. They should see themselves walking through the door with huge credibility and should build on it.”

Henbest, who also serves as the Idaho Action Coalition co-lead, did not deliberately pursue leadership. She became active in policy and leadership in the 1980s and 1990s as part of the Idaho Nurse Association’s efforts to expand scope of practice for nurse practitioners. When reform was being discussed in the legislature, she showed up to articulate the nurses’ viewpoint.

Eventually, she started to get invited to meetings. She ran for office and served in the Idaho House of Representatives from 1996 until she decided not to seek re-election in 2008.

Henbest believes she was appointed to the Idaho Health Insurance Exchange Board, which is tasked with setting the rules and regulations for implementing a state-based exchange under the Affordable Care Act (ACA), because of her experience in the state legislature.

As a nurse, Henbest feels that she brings good knowledge of the health care delivery system, a good understanding that having health insurance causes people to access care differently, patient advocacy, and teamwork and communications skills.

The biggest challenge of being on the Idaho Health Insurance Exchange Board, according to Henbest, is the task of implementing a Democratic piece of legislation in a Republican state, even though the Republican-controlled legislature passed the bill enabling a state-based exchange.

She attributes the board’s leadership and staff commitment to helping them garner the third highest enrollment rate in the country per capita.

Having health insurance “is changing people’s lives, and people are becoming happy with their insurance,” she said. “Public opposition is gradually lessening.”

Liane Connelly, PhD, MSN, RN, is putting her knowledge of the healthcare system and strategic delivery to work as a new board member of the Good Samaritan Society, the nation’s largest not-for-profit provider of senior care and services, with more than 240 centers across the United States.

As one of two nurses on the 16-member board, Connelly has helped the Good Samaritan Society pursue strategic planning to better position itself to take advantage of changes under the ACA that will govern how care is delivered to older adults.

Connelly, who is an assistant dean and associate professor at the University of Nebraska Medical Center – College of Nursing and the Nebraska Action Coalition Co-Chair for Education, encourages nurses who are interested in pursuing board positions to “put yourself out there. Nurses have expertise; they bring a whole wealth of information that is not public knowledge about patients and populations.”