IOM Evaluation Report Will Reflect Research, Perspectives From Many 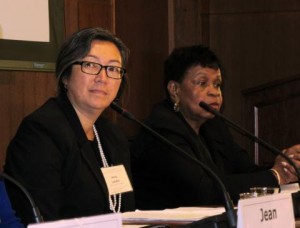 “The Future of Nursing: Leading Change, Advancing Health report changed my professional career,” wrote Dan Lose, who is getting his doctoral degree in nursing. “My desire to be involved in professional activities to improve the health care delivery system and the nursing profession is a direct result.”

Many people who were moved to act by the Future of Nursing report had reason to write and say how and why: Lose’s response was among some 100 sent to the Institute of Medicine (IOM) committee that was asked by the Robert Wood Johnson Foundation to evaluate the impact the 2010 report has had on the field of nursing and beyond.

To measure that impact, an IOM committee took testimony in private deliberations and public discussions during three two-day sessions and workshops in Washington, D.C. Findings from the research and interviews are expected in late November.

In letter after letter, people reported the progress made on education, legislation, and other facets of each recommendation from the 2010 report. Big-picture analyses included a letter from Jack Rowe, MD, former CEO of Aetna, who served on the IOM committee that produced that report. His note began: “I am quite pleased with the impact our Future of Nursing: Leading Change, Advancing Health report has had across the nation. Not only did the nursing community dig in immediately and take action to implement our recommendations, so did a whole range of diverse stakeholders….Real progress has been made.”

There were comments from the next generation of nurse leaders, like Lose of Iowa, who wrote movingly of the report’s effect on their lives. Lose was among 10 Breakthrough Leaders in Nursing awardees—winners of aCampaign initiative to encourage leadership—who sent notes.

(All public comments can be found here: http://www8.nationalacademies.org/cp/)

In her written testimony, Breakthrough Leaders in Nursing awardee Josie Veal, PhD, RN, APNP, reeled off the many leadership positions the report motivated her to assume, in nursing and beyond. In addition to serving on the board of the Milwaukee chapter of the National Black Nurses Association and chairing the group’s student mentoring committee, Veal is a board member of the Walnut Way Conservation Corporation, a nonprofit neighborhood organization building what it calls a Wellness Commons—a place offering residents health resources, fitness options, and job opportunities.

The IOM (part of the National Academy of Medicine since July) is a private, nonprofit research program whose analyses lead to “informed health decisions,” according to the organization’s website. The evaluation committee findings are to include “emphasis on future steps and areas of focus.” Those steps will undoubtedly be central to conversations at the Campaign’s national summit in December, as Campaign members convene to honor their accomplishments to date and put a plan in place to build on them in the future, in order to improve health care in this country.

This story appeared in the October 2015 issue of Advancing Health: News from the Campaign for Action.