Campaign Leaders Discuss Culture of Health and the Next Five Years 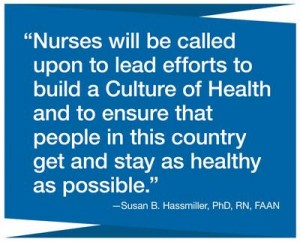 Susan B. Hassmiller, PhD, RN, FAAN, senior adviser for nursing at the Robert Wood Johnson Foundation and director of the Future of Nursing: Campaign for Action, and Susan C. Reinhard, PhD, RN, FAAN, senior vice president and director of the AARP Public Policy Institute, as well as chief strategist of the Center to Champion Nursing in America, together oversee the Campaign. In this Q&A they take a look back, and ahead at the Culture of Health, a national movement toward building healthier communities that support better health for all Americans.

Q FOR SUSAN HASSMILLER: The Robert Wood Johnson Foundation has brought attention to a vision it calls a Culture of Health, a movement all Americans can be a part of. How do nurses fit in?

Nurses will be called upon to lead efforts to build a Culture of Health and to ensure that people in this country get and stay as healthy as possible. And every recommendation in the IOM report, which the Campaign is implementing, ties in directly with the Culture of Health. In a Culture of Health, people work across sectors and disciplines to provide people with their greatest opportunities to be healthy, within and outside of clinical settings. The Campaign’s efforts to make sure that nurses have the right to practice to the full extent of their training means more nurses are able to provide primary care in more settings; in turn, Americans will have better access to affordable care.

Another example: In a Culture of Health, we promote health as much as or more than we treat illness. Nurses know how to help consumers stay healthy in the first place. Nurses need to push to be leaders and to be heard by joining committees and professional organizations related to their institutions and their communities. Nurses can lead the way in collaborating with physicians, social workers, pharmacists, businesses, housing providers, and others to build healthy communities that surround people with their greatest opportunities to be healthy. Their involvement, their contributions will bring about better decisions that help more people stay healthy. Greater influence of nurses inevitably supports a Culture of Health.

Q FOR SUSAN HASSMILLER: We know that the “social determinants of health” are a key part of a Culture of Health. How can nurses affect these social and economic factors?

Put generally, the Robert Wood Johnson Foundation sees the social determinants of health as those elements that together form a solid foundation for good health; it starts in our homes, schools, jobs, and neighborhoods. Nurses—and public health nurses in particular—are out in the community, in schools, and in correctional facilities. These nurses are well-positioned to help shape communities that give people more opportunities to be healthy.

Q FOR SUSAN REINHARD: Can you give a quick review of the Campaign’s first five years?

I think we’ve done an enormous amount to transform care through the nationwide structure we have created. We’ve succeeded because the Campaign consists of efforts in so many states: 51 Action Coalitions working to transform health care and do what is needed most by people in their states. The Center to Champion Nursing in America is the coordinator, providing support that is a catalyst for better health. I am proud of that.

I will also point to what I find particularly notable among many successes. Since the start of the Campaign, eight states—Connecticut, Maryland, Minnesota, Nebraska, Nevada, North Dakota, Rhode Island, and Vermont—removed statutory barriers that prevented nurse practitioners from providing care to the full extent of their education and training. Many more states made additional incremental changes. To put it simply: We improved access to high-quality health care for millions of consumers, and AARP participated in these wins.

To complement that success and make sure we have enough highly skilled nurses ready to practice, America’s education system has stepped up. If you look at the figures starting in 2012, you’ll see that the number of nurses graduating with a bachelor of science degree in nursing is higher than those earning an associate degree. And from 2010 to 2014, the number of students enrolled in RN-to-BSN programs increased nearly 70 percent, according to the American Association of Colleges of Nursing.

Q FOR SUSAN REINHARD: You’re a policy person. What strategies do you foresee as important for the near future?

As with the first five years, collaboration will be key. The Campaign has helped the nursing community form strong working relationships with people and groups within nursing, but we need to make these powerful alliances even more effective by linking with stakeholders outside of nursing. Nurses should be the linchpin of the movement to improve America’s health, by uniting with stakeholders in multiple sectors, including consumer groups, businesses, educators, and policymakers at the state and national levels. If we’re not connected to the people who make decisions and the places where decisions are made, it’s hard to turn goals into action. And that is what we’re doing: turning great plans into policy and actions that help more Americans.

This story appeared in the October 2015 issue of Advancing Health: News from the Campaign for Action.