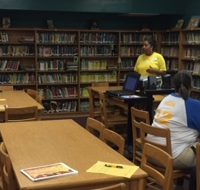 Two years ago, the Alabama Health Action Coalition (AL-HAC) wanted a focus for its efforts to build healthier communities. From a brainstorm among steering committee members came a few great things: a nutrition guidebook and trainings throughout the state; and an example of how Action Coalitions can add a big helping of health to community-building efforts (hint: don’t start from scratch).

Diversity—AL-HAC’s success stems in large part from its steering committee, which includes Alabamians from all walks of life—health care, business, politics, and the community at large, and from all over the state. That is why ideas flew like sparks as committee members exchanged ideas in early 2015.

Collaboration—As other Action Coalitions have learned, great work can start with an ongoing project whose goal is wellness. Helping the ideas fly was committee member Ron Sparks, director of the state’s Rural Development Office, who thought nurses might fit a niche in a national program just funded locally by the U.S. Education Department. GEAR UP (Gaining Early Awareness and Readiness for Undergraduate Programs), at the University of Alabama at Birmingham, included goals for personal health. Founding nurse co-leader for AL-HAC Kathleen Ladner, PhD, RN, FACHE, and Ellen Buckner, PhD, RN, CNE, AE-C, joined Sparks in talking with the potential partner.

More collaboration—In summer 2015, GEAR UP Alabama was working statewide with 9,300 families through 52 schools. Though it didn’t take long for the partners to decide AL-HAC should tackle diabetes, the state’s biggest barrier to good health, the puzzle was: how to reach all those families? GEAR UP Alabama and AL-HAC decided to tap the wealth of wisdom in those communities: AL-HAC could train dozens of Alabamians who could then coach their neighbors.

Thus was born the nutrition guidebook, the foundation used to spread the word about healthy eating.

Conveniently, the steering committee also included Miriam Gaines, MACT, RD, LD, director of dietetic internship at Samford University’s School of Public Health. Gaines and her students shaped the guidebook that she would use in five visits throughout the state in summer 2015.

The guidebook and trainings were built to disprove the popular assumption that healthy eating is costly.

The guidebook had to be easy to use by people who are not nurses, nutritionists, or dietitians.

The trainings had to keep people awake.

As Gaines put it, she knew people would come in thinking, “You’re going to help me plan a menu on a budget? Let me yawn.” But the 30 to 50 participants at her train-the-trainer sessions were more than receptive.

And the reviews come in 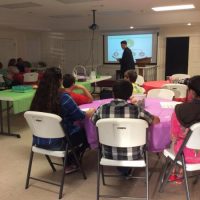 Among those receptive to Gaines’ sessions was Nanci Bryan, the GEAR UP Alabama coordinator in Phenix City. Gaines “did a great job of making it interesting,” wrote Bryan. Bryan attended the training session, and the school system’s director of child nutrition helped get the message out at a workshop for parents. Bryan said that Gaines’ tips, such as using coupons and turning leftovers into tasty main courses, were motivational for the families who had not thought before of the value in such planning.

The weekly lessons about healthy eating and fitness that Gaines taught the trainers to share with their neighbors had big impact elsewhere, too. One GEAR UP Alabama staff member, Jackie Stennis, PhD, has since developed a parent academy in Aliceville that meets one Saturday a month. An average of 20 families show up to learn about couponing, effective grocery shopping, budgeting, and healthy menu planning. Inspired by the AL-HAC and GEAR UP Alabama sessions, Stennis also teamed up with the cafeteria manager at the local middle and high schools to create a healthy food tasting that complemented a college fair she brought to town.

And thanks to the nutrition workshops, GEAR UP Alabama’s biannual financial wellness workshops now include healthy meals served to parents who attend—and attendance at the workshops is record high.

In AL-HAC’s case, a number of elements came together so the Action Coalition could contribute to a Culture of Health. The fact that its steering committee includes so many people with so many connections helped. Project manager Shaina Berry, who worked closely with the steering committee and GEAR UP Alabama team too, sums up what drives her Action Coalition and what made this particular project a success: “We have a great health care community in Alabama, it makes sense to connect it all.”