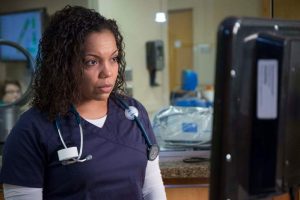 A recent profile of Huffman highlights two telling hospital moments in her life: She remembers when she was 6 the compassion and kindness the nurse showed both her and her mother, who was there after a bout of domestic violence.

That moment led to the one much later, as Huffman was graduating the diploma program to become a licensed practicing nurse (LPN). The day she was to deliver the commencement speech, she was delivering her first child. Not one to be slowed, Huffman gave her address over speakerphone from her hospital bed.

Huffman’s drive has led to a life story that dovetails with priorities of the Tennessee Action Coalition’s leadership program and the University of Tennessee College of Nursing, where associate clinical professor Pam Hardesty, PhD, RN, became her mentor and guided Huffman to become the first-ever nurse executive leadership resident with the Hospital Corporation of America.

Huffman is eager to do her part for the nursing profession in other ways, too, as someone whose mother is from Spain and whose father is African-American: “It is critical to assist with the initiatives to diversify nursing. Having the opportunity to be a young minority emerging leader is more than a title, it’s my duty and responsibility. I’m PROUD to be a nurse. Proud to promote health, well-being and unity.”

Huffman, says Myers, “embodies the nursing missions of caring and advocating for improved health and health care in a refreshing and effective way.”