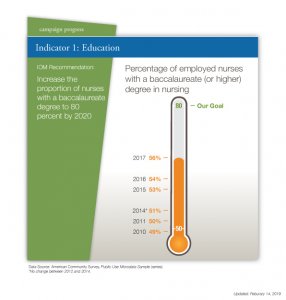 For nearly a decade now, the Future of Nursing: Campaign for Action, our state-based Action Coalitions, and supporters and allies across the nation have worked tirelessly to implement the Institute of Medicine’s Future of Nursing report recommendations. To help mark our progress, the Campaign established a series of more than two dozen national measures we call the Dashboard. Twice yearly, we update these measures to see how far we have come, and where we need to make progress.

Our latest update shows that headway continues toward meeting the IOM’s nursing goals, with noteworthy progress seen in some of the education and diversity measures. Here are the highlights:

Action Coalitions and other stakeholders may also find useful our updated series of state-specific diversity data, which are part of the Dashboard. These charts compare the racial and ethnic composition of each state with the racial and ethnic composition of that state’s RN pre-licensure nursing graduates in 2017, providing an easy snapshot of how well a state’s nursing student population reflects the diversity of that state.