This Nurse Talks Policy and She Wants You to Speak Up, Too 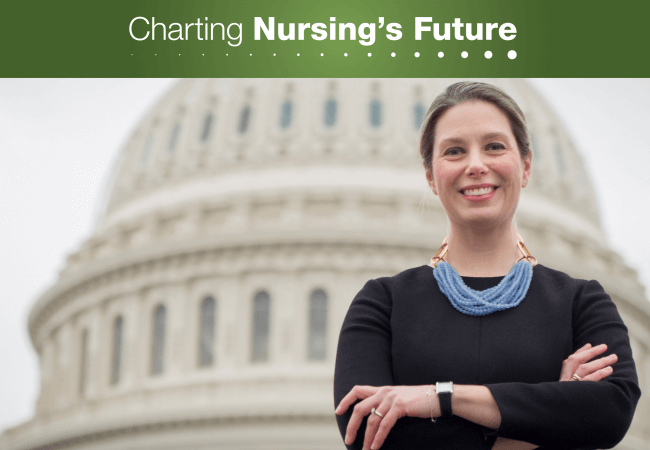 At Charting Nursing’s Future (CNF), we cover nursing issues from a policy perspective and policy issues through a nursing lens. In December, we were pleased to talk with Suzanne Miyamoto, PhD, RN, FAAN, new chief executive officer of the American Academy of Nursing, and get her thoughts on what we can expect from a health policy perspective in 2019.

Miyamoto has developed a strong reputation as a leader with policy expertise, having served as chief policy officer of the American Association of Colleges of Nursing since 2016. Miyamoto has also worked with the National Institutes of Health, The Joint Commission’s Nursing Advisory Council, and the Nursing Community Coalition, and teaches health policy to nursing students at Georgetown University in Washington, D.C. Miyamoto was a 2014 Executive Nurse Fellow at the Robert Wood Johnson Foundation and was inducted as a fellow of the American Academy of Nursing in 2015.

Looking to the year ahead, which policy developments will you be following most closely?

It’s an opportune time because we have an administration and Senate that are controlled by the Republicans, and a House that is controlled by the Democrats. It’s been my experience that a divided government really helps us think through and strategize how to overcome barriers.

It was 2010 when the last major health care legislation [the Affordable Care Act] was passed, but there have been multiple opportunities to weigh in since then, most critically in recent months on the opioid epidemic and Congress’ bipartisan effort to address it. As I look at policy developments, I’m going to be following most closely ones that have bipartisan support. Just recently, the Department of Health and Human Services released a report looking at reforming America’s health care system through choice and competition. I was heartened to hear about the administration’s interest in looking at competition from the perspective of allowing practitioners to practice to the full extent of their education and training. I think we want to pay very close attention to this issue and track it. This is essentially what we’ve been talking about for a long time, as it speaks to the consistent interest in how to improve access and quality, and how to reduce cost.

What about the states? Are there particular ones that you’re watching?

Former U.S. Rep. Michelle Lujan Grisham [(D-N.M.)] is now governor  of New Mexico, and her interests have centered on health policy reform. I think that’s going to be a big part of her agenda and of other newly elected governors’ agendas. It has been my experience, too, that new governors and new legislators want to understand and hear from their constituents. This provides us with a prime opportunity to share and frame what some of our priorities are.

There seems to be a growing focus on policies that promote population health and health equity. Where do you see nursing fitting into that picture?

I am honored to be at the Academy where health equity is front and center of our policy work.

In my first position out of nursing school, I worked in postpartum care, and some of the patients were younger or English wasn’t their first language. I saw so quickly how we are either very well-equipped, or not so well-equipped, to address inequities in population health.

I often talk to my students about the need for individuals who may be involved in health policy to hear from nurses. We don’t necessarily have to be the ones that have the recommendations of “This is how you have to [rewrite the law to] change X,” but we can say, “This is what I’m experiencing and I’m seeing, and there has to be a better way.”

Last year’s Woodhall Study Revisited looked at nurses’ representation in the media and found that nurses’ voices continue to be largely absent from those discussions. I’m guessing that means that policymakers frequently lack the perspective of nurses. Do you agree? If so, how can nurses change that?

Much of my career has focused on putting the nursing voice in front of policymakers, and part of sharing information is framing it in a way that is receivable. I found that when it comes to engaging with policymakers, the policy staff at national associations—whether they be medical, dental, nursing, or otherwise—have a very important role because they have a national perspective. At the same time, they also need to be able to say, “My constituents in your state have shared this with me.” More impactful yet is having constituents go to the Hill or to their Congress member’s state office equipped with information from their national organizations, which can suggest ways to phrase things or strategies for how constituents will get more traction. It has to be this dynamic partnership between the experts in the field and the experts in strategy.

This fall we saw a record number of women elected to Congress, including Lauren Underwood, who happens to be a nurse. I understand that you know her.

Lauren Underwood and I both graduated [in different years] from the wonderful University of Michigan School of Nursing (UMSN), where we had mentors who said, “If policy is your passion, go for it.” I’ve met a lot of people in my career who have told me, “I’m going to run for Congress,” but when I met Lauren, there was no doubt in my mind that she would do it and she would win. There was just such passion. The commitment she has is real and palpable.

During the funeral of President George H.W. Bush, his son President George W. Bush reminded us of a quote from his father’s inauguration in 1989: “We cannot hope only to leave our children a bigger car, a bigger bank account. We must hope to give them a sense of what it means to be a loyal friend, a loving parent, a citizen who leaves his home, his neighborhood and town better than he found it.” Lauren Underwood has always had that lens, and I firmly believe that there are tremendous nurses out there who can also offer that lens.

Tell me a bit more about your personal journey from patient care to policy.

Being exposed to people who said, “It doesn’t have to be the way that it was before,” really had a huge impact on my career. My dean at UMSN was Dr. Ada Sue Hinshaw, who had very rich policy experience being the first director of the National Institute of Nursing Research. I was in student government at the nursing school, and I was just honored and floored to talk with her about how we can change things for the better. At the University of Michigan, I also heard, “Blaze your own path,” and I think Dr. Beatrice Kalisch, who was a dear mentor, put that in my head early on.

Many people know you as having been chief policy officer at the American Association of Colleges of Nursing (AACN). In December, you became chief executive officer of the American Academy of Nursing. Tell us a bit about what you hope to accomplish in this new role.

I’m excited by the opportunity to build upon the Academy’s strengths and accomplishments and continue to move that forward. I am constantly in awe of what the Academy fellows and other nurses are doing to transform health. It is powerful, it is impactful, and it is changing lives on a daily basis. I truly believe that nurses move mountains, and to that end, I believe it is my role at the Academy to help the world see this.

Last year you began a very informative health policy podcast called Inside the Bubble. Why?

That podcast was part of my Robert Wood Johnson Foundation project as an Executive Nurse Fellow. I think nurses don’t know what’s actually happening in Washington, D.C. The podcast gives them a sense of how policy is made. It is exciting and powerful. We need nurses to be part of that truly meaningful work.

Note: Interview has been edited for space and clarity.