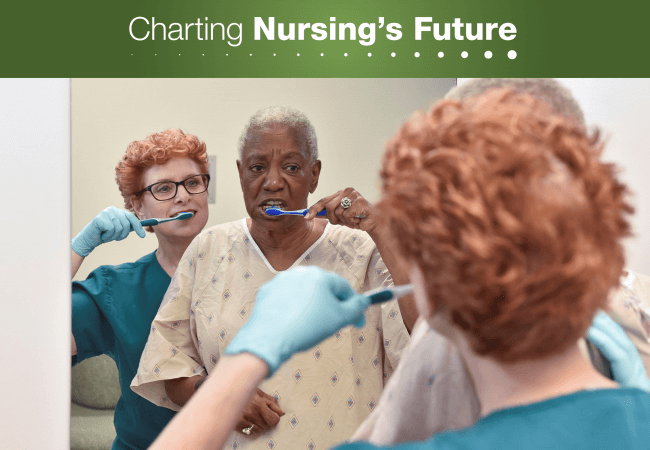 Rita Jablonski, PhD, CRNP, FAAN, has developed strategies to help people with dementia care for their mouths and teeth. Photo courtesy of the University of Alabama at Birmingham.

The care of older adults with dementia has come a long way since 1982. That’s when Rita Jablonski, PhD, CRNP, FAAN, professor and director of research and scholarly development at the University of Alabama at Birmingham School of Nursing, began studying nursing. “We were told in nursing school back then to reorient people who have dementia. That made the behaviors worse,” Jablonski says, and nurses bore the brunt of patients’ frustrations, sometimes physically.

Jablonski has been around people with dementia since taking her first job after high school as a nurse’s aide at St. Joseph Manor outside Philadelphia. She worked the 3–11 p.m. shift and was assigned to do mouth care. At the time, very few people retained all their teeth into older adulthood, she says. Dentures were the norm.

Jablonski vividly recalls trying to remove the dentures of a 98-year-old woman in her care. “She had dementia, and she could fight,” Jablonski says. “She would literally pummel me.” When Jablonski sought advice from the RN in charge, she was told to hold the woman’s nose so she would open her mouth. Jablonski wasn’t having it, but another solution soon presented itself. “When I did bed checks two hours later, she was snoring with her mouth open. I was able to remove her dentures, and I thought, ‘Ah, this is a strategy.’” 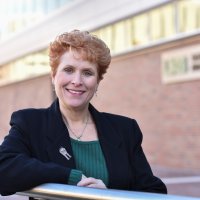 In choosing to focus on mouth care, Rita Jablonski, PhD, CRNP, FAAN, joined a small but growing sorority of nurses who champion the integration of oral health into overall health care. Photo Courtesy of the University of Alabama at Birmingham.

Several decades have passed since that seminal experience, but it continues to inform Jablonski’s work as a nurse and her focus on research that’s relevant to both clinicians and caregivers. In choosing to make mouth care a central focus of her work on dementia, Jablonski joined the small but growing sorority of nurses who have focused their careers on championing the integration of oral health into overall health care. This influential group has made impressive strides—in research, education, and practice. Yet as the population of older adults with dementia steadily grows, the supply of nurses who are prepared to help maintain their oral hygiene is not keeping pace, and systemic barriers to providing such care remain firmly entrenched.

Jablonski notes that federally mandated staffing ratios for skilled nursing facilities were set in 1987, when nursing homes housed a mix of people, many of whom were relatively independent. Today, healthier older adults reside at home or in assisted living facilities, she says, so nursing homes “have a frailer, older, and in many cases medically complex population, and a nursing assistant taking care of 10 people who all require 100 percent care.” Under these circumstances, she says, mouth care is the easiest thing to skip, especially if patients resist that care. This reality is unfortunate—not only for the oral and overall health of patients, but also for their caregivers. In Jablonski’s experience, “many disruptive behaviors in long-term-care facilities are generated by oral health problems.”

The lack of an oral health benefit in Medicare further exacerbates the problem. In 2018, an AARP survey of older adults found that 38 percent of respondents had not seen a dentist or dental hygienist in the previous year, and almost half did not receive care or delayed care for an oral health condition. Respondents cited lack of insurance and cost as the primary impediments to dental visits.

That may change as advocacy for an effort known on social media as TeethinMedicare gains ground. Three bills (S.22, H.R.2951, and S.1423) aimed at creating a dental benefit in Medicare have been introduced in Congress, and in 2020, the Office of the Surgeon General will be releasing an oral health report that could catalyze action on this legislation. In the meantime, oral health champions in the nursing community are pushing ahead. Their priorities include clinical research to further the case for routinely attending to the oral health needs of older adults, and developing techniques that can assist caregivers in accomplishing this goal.

Today, Jablonski is  engaged in a three-year project, “Brushing Away Infections,” funded by the Centers for Medicare and Medicaid Services. She and her collaborators are training caregivers in seven Birmingham, Ala., nursing homes to provide mouth care and minimize care-resistant behaviors in older adults with cognitive impairments. Eventually, Jablonski would like to see caregivers apply these same techniques to other activities, such as bathing and dressing.

Toward the end of her tenure at St. Joseph’s, as she was about to complete her nursing degree, Jablonski had an experience that still guides her to this day. At 2 a.m., she heard a woman struggling to get out of bed, saying she needed to catch a train to go to work. Jablonski responded as she had been taught in nursing school.

“‘Miss Smith, it’s 1985. You are at St. Joseph Manor, and you are safe. Please go back to sleep.’ I’m standing there arguing with this 80-year-old woman with dementia, and as I’m making her more and more agitated, in walks another nurse’s aide. She gently held the woman’s hand and said, ‘The train isn’t here. It’s the middle of the night. Go back to sleep, and I’ll wake you up in time to catch the train, so you won’t be late for work.’ She entered the woman’s reality. The woman said, ‘Thank you,’ rolled over, and went back to sleep.” 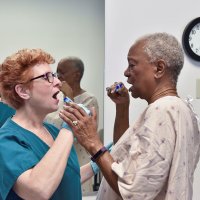 Nurse Rita Jablonski has developed videos and other teaching tools to help caregivers identify and overcome care-resistant behaviors.Photo courtesy of the University of Alabama at Birmingham.

Jablonski fears that today’s nursing students are still not being prepared to deliver the type of compassionate care she witnessed that night or to attend to patients’ oral health needs. In 2011, she reviewed the most popular nursing fundamentals textbooks to see how much content was devoted to oral health. The answer was just one half of one percent. Much of it was outdated or erroneous, she says, and only one textbook contained anything about cognitively impaired older adults or care-resistant behavior. She believes nursing education will also need to change before the oral health of adults with dementia receives the attention it deserves.

Resources on Providing Mouth Care to People with Dementia

A 30-minute video explaining how nurses can recognize care-resistant behavior in persons with dementia and intervene to provide evidence-based mouth care.

A 34-minute video with tips on managing dementia-related behaviors in acute and long-term care settings.

Rita Jablonski’s blog with guidance on “turning a devastating disease into a positive journey!”

Links to Rita Jablonski’s published papers on oral health and the care of people with dementia.

Tooth decay is preventable, yet it is the most prevalent chronic disease in the United States. Dental disease also contributes to systemic conditions such as diabetes and heart disease. Meanwhile, many people neglect their dental health because they lack insurance coverage and the cost of dental care places prevention and treatment out of reach.

To remedy this situation, a vanguard of health professionals has called for the integration of oral health and comprehensive health services. Nurse practitioners like Rita Jablonski have led the way in developing resources to inform educators and clinicians and help them integrate oral health in curricula and practice. To learn more, explore the resources below.

This initiative, based at the New York University College of Nursing, provides a gateway to a wide array of resources, both for educators who want to prepare nursing students to play a role in preventing dental disease, and for clinicians who want to improve the quality of their patients’ oral health.

This special issue of Nursing Research and Practice features articles on the diverse ways nurses are promoting oral health integration.