It’s not called great for nothing: Held on 375 acres near Syracuse over 12 days, the Great New York State Fair welcomed a record crowd of more than 1 million people this year. Amid the rides and fried foods and cotton candy were nurses talking with fairgoers about health.

Since 2011, the New York State Action Coalition has gone to the fair, staking out a place in the science and industry building to recruit would-be nurses and educate everyone about nurses and well-being.

More than 2,500 fairgoers stopped by the booth this year, say Maria MacPherson, RN, MPH, a practicing public health nurse in Syracuse who was selected by the Robert Wood Johnson Foundation to be part of its Public Health Nurse Leader program; and Deborah Elliott, RN, BSN, MBA, executive director of the Center for Nursing. To show fairgoers how nurses promote healthy lives—this year’s theme—and get their thoughts on health, the nurses had two blunt instruments: For the children, crayons. For the parents, grandparents, and the general public, a survey.

“Would you like to draw a picture of what you do to stay healthy?” 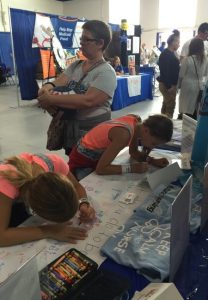 Yes, said children (and teens!), who immediately took crayons to the blank paper that covered the tables to draw images of fruits, vegetables, water, and people jogging. Often the children seemed more attuned to what good health demands than the adults, some of whom were reluctant to complete a survey—even one that allowed people to stay anonymous and took five to 10 minutes to fill out—that asked about their own healthy behaviors. But others were eager; in all, 326 filled out the form, which was offered on tablets and a QR app that let people respond on their smartphones.

The booth was staffed by six to eight a nurses a day—100 volunteers altogether—who had plenty of healthy food for thought for fairgoers not taking the survey. In a split second, nurses could use the County Health Rankings & Roadmaps to show someone exactly how his or her county ranks on measures such as smoking, physical activity, even sleep habits.

Volunteers also had time to talk about the many ways in which nurses are integral to the health care system, a conversation that lots of people careening between carnival rides and concerts probably did not expect to have. 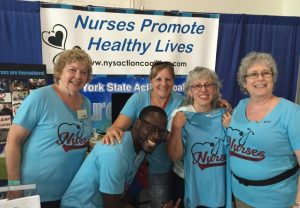 It was unexpected fun for the volunteers, too, who included student nurses and those from agencies such as the Visiting Nurse Association. Trudy Hutchinson, a registered nurse who is part of the New York State Action Coalition, told of a mother and daughter who came to the booth in particularly good moods. The mother explained: “I have been a nurse for many years and love my work on ortho. Now my daughter has just been accepted to a nursing program.” Not just any program—her daughter was just about to start the dual degree partnership in nursing program between LeMoyne College and St. Joseph’s College of Nursing. The daughter said, “I’m excited and anxious at the same time.”

Meeting people where they are is wonderful, says Elliott, because the surroundings are wholly different from the typical nurse-meets-patient scene. The booth was a place for easy conversations about healthy behaviors and healthy communities. As nurses handed out fans and rubber bracelets (“caring+passion=nursing” was a favorite), they talked to people of all ages about careers in nursing; posters showed doing their jobs in all sorts of settings, including businesses, camps, schools, and the Armed Forces.

The fair isn’t over for Elliott and MacPherson, who are eager to delve into findings from the survey. With more than 300 responses, they hope they’ll get at least a broad idea of what the needs are in New York, as well as the good activities that can be tried elsewhere. They will be looking for overlap in behaviors, and opportunities to tie in the findings with actions the Future of Nursing New York State Action Coalition (NYSAC) can take to build healthier communities throughout the state. It’s a big charge for a big area: NYSAC has seven regional offices, all with various interventions to advance the nursing profession so that that New Yorkers can count on being able to see a nurse when and where they need to.

For more information about NYSAC and nursing in the state of New York, visit www.fnysn.org.

Top photo: Two young girls drawing pictures of what they do to stay healthy.