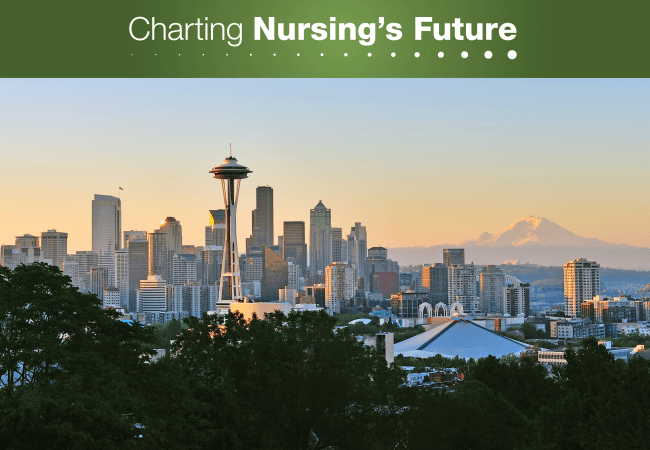 Digital technologies are transforming health care delivery, but will they advance the health of all Americans or create new barriers to caring for large segments of the population?

Tech sector and nursing leaders pondered this question at the third in a series of regional meetings that will inform a National Academy of Medicine (NAM) report on nursing’s future. The Aug. 7 town hall, hosted by the University of Washington School of Nursing in Seattle, explored the theme High Tech to High Touch. Foremost on the minds of attendees and members of the NAM Committee on The Future of Nursing 2020-2030: how nurses can position themselves as leaders in the quest to ensure that technological change serves rather than undermines nursing’s tradition of providing empathetic, personalized “high touch” care to those who need it most.

Whether health care providers are aware of it or not, artificial intelligence has already enabled tens of millions of consumers to seek care through online services rather than heading to the emergency department (ED) or traditional outpatient venues. In one panel on “Advancing Health Care Equity in the Digital Age,” AVIA Executive-in-Residence Molly Coye, MD, said these “emerging patterns of digitally enabled care…will profoundly change the responsibilities of nurses and other clinicians.” Examples of such care include an online diagnostic system, a text-based service that triages patients seeking primary care, and an app that uses behavioral economics to motivate people with chronic conditions to take their medications as prescribed. Coye described all three ventures as disruptive innovations—models of care that are “convenient, cheap, and good enough” to thrive in the marketplace, where consumers are rapidly adopting them.

“Why aren’t nurse practitioners starting companies like this?” she asked.

In her prepared remarks later in the town hall, the President of the American Academy of Nursing, Karen Cox, PhD, RN, FAAN, provided a ready response to Coye’s question. She cited two Academy Edge Runner models: one that uses web cameras to encourage bonding between families and infants in neonatal ICUs, and another that uses video streaming to enable nurse practitioners in rural emergency rooms to deliver unscheduled care to underserved communities.

While several presenters called for greater technological literacy among nurses, many also emphasized that nurses need to be at the table when technologies are developed, adopted, and implemented. “Digital transformation is not so much about the technology, per se,” said Molly McCarthy, MBA, BSN, RN-BC, chief nursing officer at Microsoft. “It’s really about culture shift.” She said nurses are critical to the transformation occurring in the health care industry and urged them to continue learning throughout their careers.

As anyone who has used an electronic health record knows, technological change can be challenging, and changes that benefit some can create risks for others. Nassau Community College Dean of Nursing and Health Sciences Kenya Beard, EdD, NP-C, FAAN, offered an example during her talk, which focused primarily on health equity. She cited the case of a physician’s office that cancelled the appointment of a Spanish-speaking woman when she failed to confirm the appointment in response to an English language text message. “While technology is attractive, it is not a panacea,” Beard said. She reminded the committee of an earlier NAM report on racial and ethnic disparities in health care and implored the members to

“look upstream and ensure that nurses understand, recognize, call out, and are empowered to mitigate structural racism, the invisible forces that have infiltrated our society and our health care system.”

The panel moderator, Sue Birch, MBA, BSN, RN, director of the Washington State Health Care Authority, reflected that while the technologies referenced by the panelists were extraordinary, she—like many in attendance—was also moved by the call to address structural racism and not allow technology to create new barriers to care.

Much of the discussion at the Seattle meeting was a welcome follow-up to calls from presenters at the Philadelphia town hall for better data collection and analysis. Sheila Shapiro, MBA, senior vice president–national strategic partnerships at UnitedHealthcare Clinical Services, spoke about her organization’s advocacy for the adoption of 23 new ICD diagnostic codes to enable clinicians to document social determinants of health in a standardized fashion. She called on nurses to commit to documenting patient’s social needs and advocate for using the new codes within their institutions.

Presenter Eli Kern, MPH, BSN, an epidemiologist with Public Health Seattle and King County, seconded the focus on data collection and called for sharing it across sectors. Data sharing creates a more holistic picture of what’s happening in people’s lives, he said, making it easier to intervene effectively to promote health.

But data collection can be time consuming and may prevent nurses from delivering the “high touch” care that has been the hallmark of their practice. One study found it would take a staggering 593 clicks to fully complete one hospital’s electronic health record. Press Ganey’s Chief Nursing Officer Christina Dempsey, DNP, MSN, FAAN, echoed the idea that data collection alone is not enough. 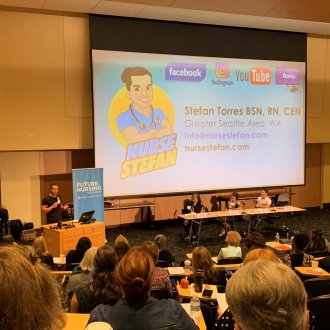 Stefan Torres testifying before the Committee on the Future of Nursing 2020-2030 in Seattle. Photo credit: Scott Tanaka.

“We have to help nurses draw insights from that data and make improvements based on those insights,” she said. Presenter Stefan Torres, BSN, RN, CEN, a Swedish Medical Center nurse whose educational videos have a considerable online following, suggested that frontline nurses might be more motivated to gather data if they were informed about how it would be used.

In her role as Senior Scholar in Residence and Senior Advisor to the President on Nursing at the National Academy of Medicine, Campaign for Action co-chair Sue Hassmiller, PhD, RN, FAAN, closed the meeting by reminding everyone who did not have a chance to speak that “the committee is interested in hearing every single word you have to say.” Comments may be submitted via email.