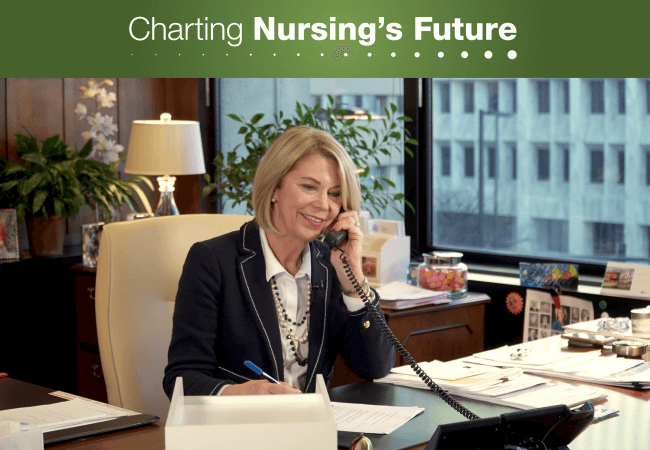 More and more women are serving in elected office, and not surprisingly, some of them are nurses or former nurses. How have they made the transition from clinical practice to the policy arena? How has their nursing perspective informed their policymaking?

We asked these questions, and others, of Jean Stothert. In 2013, she became the first woman to serve as Omaha, Nebraska’s top executive. She was re-elected in 2017 for a second term as Omaha’s mayor on a platform of improving public safety, increasing employment opportunities, and revitalizing the city’s neighborhoods.

What set you on a path toward public service?

I feel like we all have a civic responsibility to give back to our community. I chose to go into the field of nursing because that’s where I felt I was needed the most. Even back when I was a new graduate from nursing school, I chose to practice at St. Louis University (Mo.) Hospital because it was in an urban setting, and I felt like that’s where I could really make a difference.

When we moved to Omaha, my children were little. Because my husband’s job as a trauma surgeon was very demanding, I really wanted to be involved in my kids’ life and be available for them. I didn’t go back to nursing but got involved in the school district, and that simple desire to get involved started my political life.

I served three terms on the school board, and then midway in my last term, I decided to run for the legislature. I did not win, but I went on to run for city council, which I did win.

How did you become mayor?

When I was midway through my first term on the city council, I had to make a decision—whether I was going to run for council again, or whether I wanted to do something different. I was down at City Hall every day. I understood how to negotiate labor contracts. I understood the budget. I understood the city departments, and frankly, I did not like the job that the mayor was doing.

I felt like I could challenge the mayor, and so we worked very, very hard, and we knocked on tens of thousands of doors, ran a really aggressive grassroots campaign, and, in the end, we beat the incumbent mayor by about 16 percentage points.

Who helped you along the way?

First and foremost, I’d have to say my husband and my family. At lot of times, he would be up all night long working on a Friday and come home Saturday morning and say, “Let’s go,” and we would walk the entire day. I also had a very strong campaign manager, a very strong campaign fundraiser, and over 400 volunteers that knocked on doors. We knocked in snow, sleet, and rain. We were out there sometimes 10 hours a day knocking on doors and connecting with the voters, and I truly believe that’s why we won. 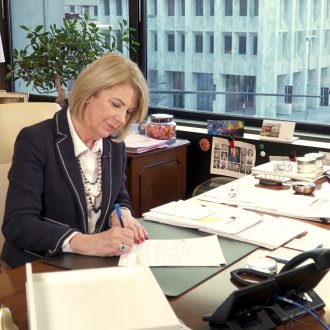 What accomplishments are you most proud of?

The first time I ran for mayor, I stated my goals very clearly: number one, public safety; two, managing and controlling the city budget; three, jobs and economic development; and four, improving the taxpayer experience.

Keeping the citizens of the city safe is my top responsibility, and we have made great headway as far as crime in Omaha in the last five years since I have been mayor. In fact, this year alone, violent crime is down 10 percent. Our homicide rate is the lowest it has been in 25 years.

We’ve done a lot of expansion of our police department, adding almost 100 more officers. We’re building a new police precinct now. We’ve bought a lot of new equipment, and it has really paid off. That is probably what I am most proud of because it’s all about keeping the citizens safe. If we want the city to grow economically, if we want businesses to thrive, we have to have a safe city.

One of the things I’m working on now is a massive redevelopment of property the city owns that runs along our riverfront. It’s a great example of a public-private partnership involving both our business and philanthropic communities.

Do you anticipate any impacts related to health from this redevelopment effort?

Absolutely. We have a Complete Streets policy here now in Omaha, and it has been looked at as one of the best in the country. Any new development has to follow that policy and look at all the ways that people commute. We look at pedestrians; we look at bikes. We look at public transportation; we look at automobiles. That walkability aspect is very important.

Another thing the city has been working on for years is urban gardens to address access to fresh foods in those areas that have high poverty levels. We started with one or two gardens, and now, working with private partners, we have over thirty different urban gardens on city-owned property that allow citizens to grow their own fruits and vegetables. Having walkable cities, having good healthy foods, having a safe city, having clean air, being a sustainable city—those are all things that are very important as we move forward.

What have been your biggest disappointments?

I really can’t think of any disappointments. I can think of frustrations, so I could put it that way. Things with City Hall work very slowly, and we’re trying to make that process work faster by using technology and new techniques. We’ve made a lot of progress, but we still have a ways to go.

How has your background as a nurse shaped your priorities and influenced your ability to get things done?

I think a lot of the skills I learned as a critical care nurse, and as head nurse in a critical care unit, have really helped me in the job that I have today. First of all, listening—that is so important, and that’s one skill you have to have to be a good leader.

As the first woman to become mayor of Omaha, what do you want to tell other women who are seeking office or who have been elected and are about to enter public office?

There’s a lot of talk about how women are under-represented in elected office, and there are studies out there showing women have just as good a chance of getting elected as men do. The issue is getting them to run in the first place, because there is a hugely larger percentage of men than women that run for public office. Once women run, they tend to do very well.

For Mayor Stothert’s full comments on women running for public office, click on the video below.

Note: Interview has been edited for space and clarity.