Many States, One License: The Enhanced Nurse Licensure Compact Is Now Live 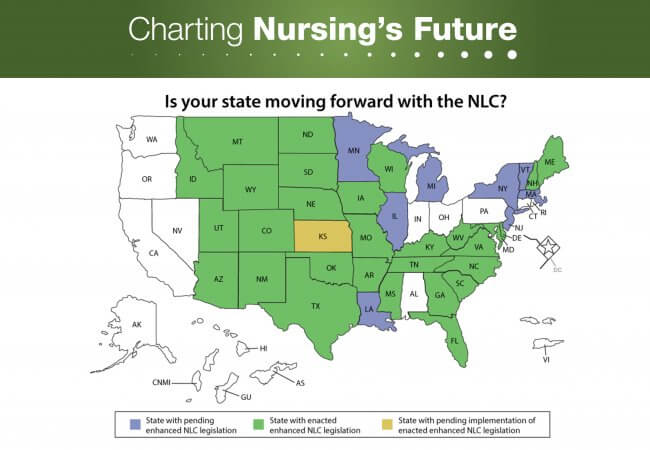 Colorado and New Mexico are the latest states to join the enhanced Nurse Licensure Compact. More than half of U.S. states, 29 in all, are compact members. CREDIT: Map courtesy of the National Council of State Boards of Nursing.

As the 21st century has progressed, it’s become increasingly apparent that allowing geographical boundaries to limit health care professionals’ reach is not good for consumers or the people providing care. The average American now moves approximately 11 times in a lifetime; the days of settling and staying in one place are all but gone. Meanwhile, telehealth is growing, and is often used to deliver health care to people who live in remote and underserved places.

In 1999, Maryland became the first state to join the nation’s original Nurse Licensure Compact. Before the compact was created, nurses had to obtain a separate license for every state where they practiced. This applied to nurses who moved from one state to another; nurses who lived near neighboring states and sought employment across the border; and even nurses who traveled to help during natural disasters in other states. Under the compact, nurses could obtain multistate licenses that allow them to practice physically, telephonically, or electronically in any of the member states without having to obtain a new license in each state. By 2015, 25 states were part of the compact.

Implementation of the enhanced Nurse Licensure Compact (eNLC) began on January 19, 2018. The eNLC introduced 11 uniform requirements for a multistate license to ensure that nurses from eNLC states have comparable qualifications.

Here are some facts about the eNLC: