Hassmiller Takes the Campaign on a Military Visit 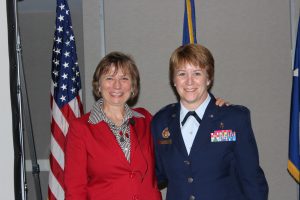 The Future of Nursing: Campaign for Action had two opportunities recently to address members of the armed forces about Campaign efforts to build healthier communities through nursing.

Hundreds of nurses in Texas heard from Susan B. Hassmiller, PhD, RN, FAAN, senior adviser for nursing at the Robert Wood Johnson Foundation and the director of the Campaign, in April when she visited the Air Force nurses at the Defense Health Headquarters, and local military nurses at the San Antonio Military Medical Center. 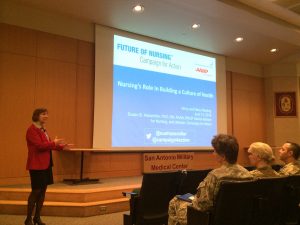 Major General Dorothy A. Hogg, deputy surgeon general and chief of the Air Force Nurse Corps, invited Hassmiller to address 300 nurses from across the country, including chief nursing officers and nurse managers. The conference focused on reliability and safety, two aspects of wellness that Hassmiller wove into her comments about healthy communities even as she highlighted her personal ties with the Air Force—her mother’s Air Force service. Hogg, who has both bachelor’s and master’s degrees in nursing, paid tribute to Hassmiller’s mother, saying she and others stood on the shoulders of Sue’s mother and those earlier generation of military nurses. 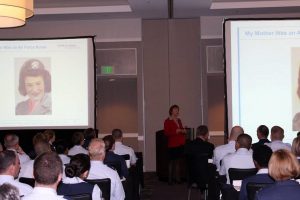 Susan Hassmiller speaking to military personnel about her mother’s service.

Hassmiller noted a family tie in speaking to members of the Army and Navy at the medical center, too, which included nurses from the local Veterans Affairs hospital: Her husband, who served in the Vietnam War, credits Army nurses with saving his life. Inviting Hassmiller to speak was Rear Admiral Rebecca J. McCormick-Boyle, director of the Navy Nurse Corps and commander of the Navy Medicine Education and Training Command.

In speaking of Culture of Health matters, Hassmiller also was glad to mention to the military audience a grant from the Robert Wood Johnson Foundation to study the influence of psychological and physical health on illness and health care spending, using the use Army’s data of more than 1 million people.