Dubree Inducted Into YWCA’s Academy for Women of Achievement

Marilyn Dubree, MSN, RN, executive chief nursing officer, will be inducted along with seven other inspiring Nashville women into the YWCA’s 2016 Academy for Women of Achievement. 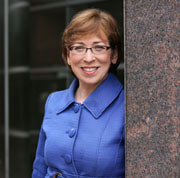 The inductees will be honored at the 25th annual Academy for Women of Achievement Celebration and induction dinner on Oct. 6. The event is presented by YWCA Nashville & Middle Tennessee and First Tennessee.
“I am very honored to receive this award and to be part of the Academy for Women of Achievement,” Dubree said. “This is truly a reflection of the mentors and many colleagues who have supported and inspired me.”
Other honorees are Megan Barry, mayor of Nashville; Katherine Brown, president and founder, Learn CPR America; Claire Gulmi, executive vice president and CFO, AmSurg; Cordia Harrington, founder and CEO, The Bakery Cos.; Metro Nashville Councilwoman At-Large Sharon Hurt, founder and CEO, Jefferson St. United Merchants Partnership (JUMP); Beverly Keel, professor and department chairwoman, Middle Tennessee State University Department of Recording Industry; and Aleta Trauger, U.S. District Court judge for the Middle District of Tennessee.

“On behalf of Vanderbilt University Medical Center, I want to congratulate Marilyn on this well-deserved honor. She is an exemplary leader who cares deeply about the Medical Center, its people and those we serve, continually representing the very best of our culture and values,” said C. Wright Pinson, MBA, MD, Deputy CEO and Chief Health System Officer, VUMC.

“This year’s honorees have made and are continuing to make significant contributions to their community,” said AWA co-chairwoman Mary Winn Pilkington. “Middle Tennessee is a better place because of their inspiring work, and we are excited to honor them in October.”

Event co-chairwoman Rita Johnson-Mills echoed these sentiments, saying, “These honorees are remarkable leaders and true inspirations to us all. They are driven, successful women whose service to their community deserves recognition and gratitude.”

The Academy for Women of Achievement was launched locally in 1992 by YWCA Nashville & Middle Tennessee, and it is being presented for the 11th year by First Tennessee. The AWA honors women who, through excellence and leadership in their chosen fields, serve as role models for other women. This year’s recipients join 143 other women who hold this distinctive honor.

The Academy judging committee, which is composed of business and community leaders, chose the honorees from an exceptional list of nominees.

The awards celebration will be held Thursday, Oct. 6, at the Omni Nashville Hotel, and proceeds from the AWA recognition dinner help fund YWCA programs and services.