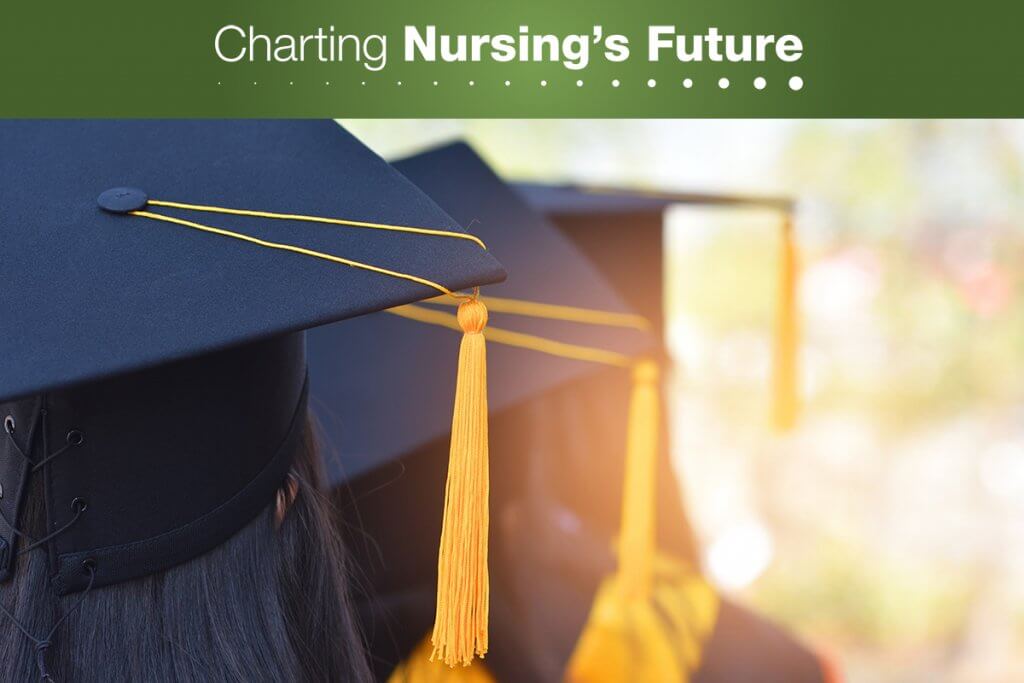 Nurses across the country are on the move to better their education.

This in response to the 2010 Institute of Medicine (IOM) Future of Nursing report, which set an audacious goal around nursing education. It called for 80 percent of the nursing workforce to obtain a Bachelor of Science in Nursing (BSN) or higher degree by 2020.

Time has revealed that goal to be aspirational, but by setting its sights high, the IOM succeeded in spurring the nursing community to advance the educational attainment of U.S. nurses.

“By any measure, the 80/20 goal mobilized nursing in a direction like nothing else I have ever seen in my career,” says Patricia Polansky, RN, MS, a director who leads nursing education work at the Center to Champion Nursing in America (CCNA), an initiative of AARP Foundation, AARP, and the Robert Wood Johnson Foundation. “Looking at the change that is taking place across the entire country to move academic progression in nursing forward, this has been an enormous achievement.”

OADN, along with representatives from the Forum of the National Nursing Workforce Centers and Western Governors University, is leading a new, nationwide effort to encourage academic progression and to accelerate educational advancement for nurses across the country, the National Education Progression in Nursing Collaborative (NEPIN). The OADN Foundation serves as fiduciary agent for NEPIN. Formed last year with seed money provided by the Robert Wood Johnson Foundation (RWJF), NEPIN will build on the success of two earlier RWJF initiatives, the State Implementation Program (SIP) and Academic Progression in Nursing (APIN), both described below in more detail. The strategies developed and honed by APIN and SIP rely heavily on cooperation between academic partners that have traditionally focused on different missions.

“The associate degree is still an excellent pathway into nursing,” says Meyer, “and in many parts of this country we wouldn’t have an adequate nursing workforce without it. Many nurses began their education with an associate degree.” Nevertheless, Meyer believes, nurses must ultimately earn higher degrees—both to meet employer demands and to fulfill an ongoing need for nursing school faculty. Partnerships among universities, community colleges, and practice sites are the best way to achieve this goal, in her view, and she says the associate degree community is eager to take a leadership role in advancing these partnerships.

According to NEPIN’s national program director, Tina Lear, MHA, the organization wants to be a national clearinghouse where people can share their successes and connect with mentors. To facilitate this exchange, NEPIN has formed a “Discovery Alliance,” whose members will report on their activities to further academic progression. The group is also developing an interactive map on its website to chart the pulse of what’s happening across the states.

NEPIN is focused on generating progress in five areas:

Lear says NEPIN’s broader focus on the factors that help nurses find professional satisfaction in their roles sets the organization apart from earlier groups focused on academic progression. “This has allowed us to bring in partners who are invested in the success of the profession but didn’t feel they had a place at the academic progression table before,” she says.

One NEPIN ally is the National Forum of State Nursing Workforce Centers, which is partnering with NEPIN to identify appropriate metrics to monitor and disseminate. In particular, NEPIN wants to find a consistent means of tracking progress toward the ambitious goal it has set: 1 million more nurses and 90 percent of student nurses currently enrolled in associate degree and diploma programs obtaining BSN or higher degrees by 2025. That’s a tall order, but one that NEPIN hopes to fulfill.

“The nursing education pipeline is now rich and full, where it wasn’t before, and it will continue to build and expand. At the end of the day, that’s what any goal is set out to do.”

In reflecting back on the 80/20 goal set by the IOM, Polansky notes, “The nursing education pipeline is now rich and full, where it wasn’t before, and it will continue to build and expand. At the end of the day, that’s what any goal is set out to do.”

Lear agrees, and she is confident that NEPIN’s allies can achieve great things together. She and Meyer encourage all Future of Nursing: Campaign for Action state Action Coalition members to join the academic progression movement and invite those who are already engaged in this work to share their progress through the NEPIN website.

Strategies developed and honed by APIN and SIP are catalogued in Nursing Education and the Decade of Change: Strategies to Meet America’s Health Needs and described on the NEPIN website.

APIN was funded by the RWJF in partnership with the nursing Tri-Council, and was administered by the American Organization of Nurse Executives (AONE). The program gave grants to nine state-based organizations to develop strategies for increasing the number of BSN-prepared nurses.