A Dashboard of One’s Own: Four States Track Their Successes 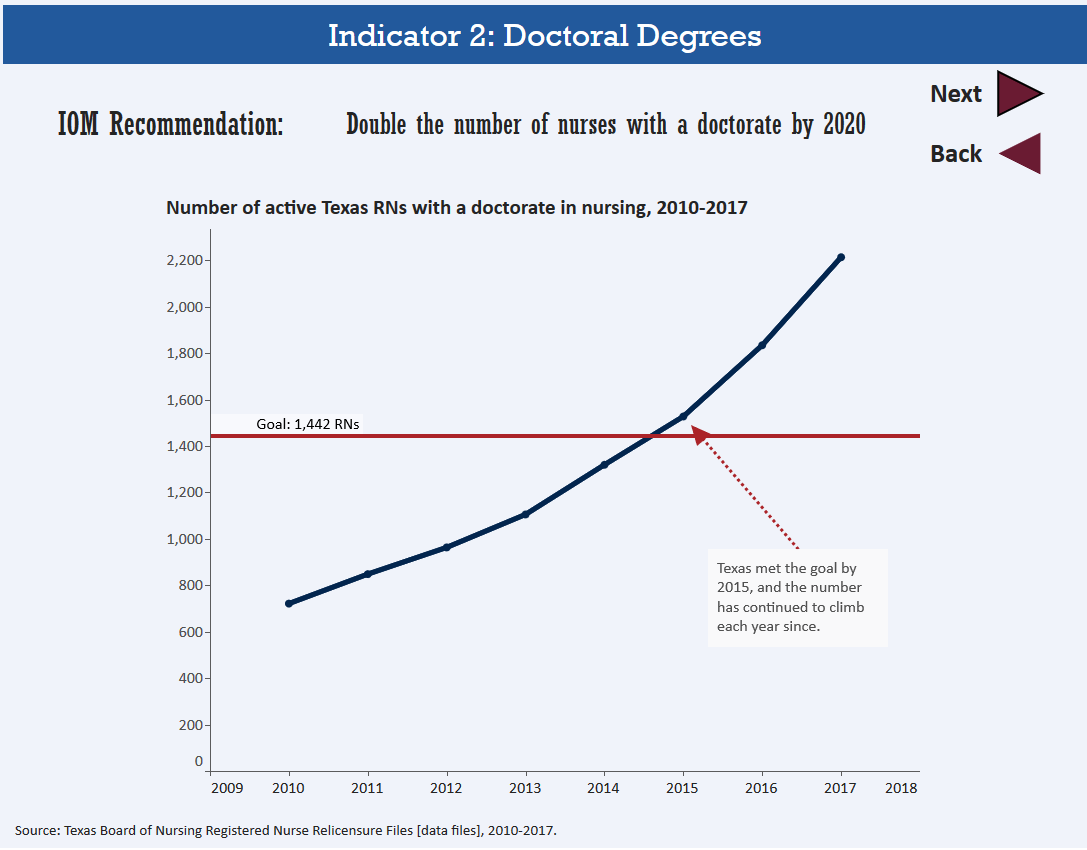 Since the Future of Nursing: Campaign for Action began, it has measured the progress that nursing has made across the U.S. on a national data dashboard. Now at least four  states are creating their own dashboards, using as a yardstick—as does the Campaign—the goals laid out by the Institute of Medicine (now the Health and Medicine Division of the National Academies) in The Future of Nursing: Leading Change, Advancing Health report.

For example, scroll down the “about” page for the Texas Team: Using information from the Texas Board of Nursing and Texas Center for Nursing Workforce Studies, Texas reports in easy-to-understand graphics how close it’s coming to its 2020 goals in education. The Texas Team also depicts in a bemusing way the roadblocks it has overcome (and still faces) in changing the laws to increase the public’s access to nurse-provided health care.

Bringing the truth about nursing progress home for its residents, too, is Nebraska, which invites website visitors to take a spin through its successes on six indicators. For example, the national data dashboard posted by the Campaign shows the percentage of employed nurses with a baccalaureate (or higher) degree in nursing stands at 54 percent as of 2016. Nebraska’s close-up look shows its percentage as of 2016 stands at 64 percent. (Hooray  for all, but especially slide 3, which celebrates Nebraska’s becoming the 20th state to adopt full practice authority for nurse practitioners.)

Hawai’i has also honed in on its growth toward increasing the percentage of nurses with a bachelor’s or higher. Using data including the 2016-2017 Hawai’i State Nurse Education Capacity Survey, the state forecasts it will achieve the IOM goal of having an 80 percent BSN-prepared workforce more quickly than the nation as a whole.

Wisconsin lays out its progress points on the Wisconsin Center for Nursing website, including the fact that the number of Badger State nurses with a BSN or higher is about 6 percent higher than the national average.

With strong visuals, leaders in these states can make the case for nursing more easily with information specific to their residents. Congratulations Texas, Nebraska, Hawai’i and Wisconsin for going the extra mile to translate the IOM’s national goals to the state level, making them more accessible for all.

If your state has created its own data dashboard, the Campaign would love to hear from you. Make sure to contact us.