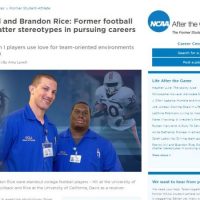 One cites the team atmosphere; the other, the value of hard work and staying calm under pressure. Both are football players-turned-nurses who see common elements in their old and new professions.

Patrick Hill and Brandon Rice, two star college players who grew up in Los Angeles, did not meet until each found his way to the UCLA School of Nursing, where they graduated in June.  The NCAA wrote about their separate paths earlier this year, noting that now they want to shatter stereotypes, not on-the-field records.