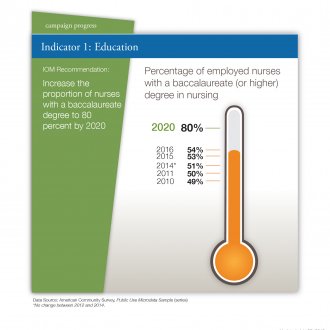 Progress continues toward meeting Future of Nursing goals established in 2010 by the then-Institute of Medicine, with particularly noteworthy improvements seen in nursing education. This is illustrated by the latest update to the Campaign Dashboard, a series of national measures tracking the report’s implementation efforts in nursing education, leadership, scope of practice, and more.

Specifically, newly published data show that more nurses are heeding the call to pursue higher levels of education. In 2017, nearly half of all U.S.-educated, first-time NCLEX takers had a bachelor of science in nursing (BSN), but in 2010 only about 40 percent did. Further evidence of the trend toward more education is also seen in the growing number of nurses graduating from RN-to-BSN programs. In 2010 there were 22,500 RN-to-BSN program graduates, and that number has grown to nearly 63,000 in 2017—a noteworthy 180 percent increase.

While enrollment in nursing-focused PhDs continues to decline after peaking in 2014, enrollment in doctorate of nursing practice (DNP) programs continues to grow significantly. In 2017, more than 29,000 nurses were enrolled in DNP programs, a more than 300 percent increase from 2010. The number of DNP graduates also continues to dramatically rise: there were 6,090 in 2017, up from 4,855 in 2016.

Also notable is the growing number of nurses who report serving on boards and the number of hospitals pursuing Magnet status, a designation of a hospital’s commitment to nursing excellence and high-quality patient care: 30 new hospitals attained Magnet status in 2017.

To improve public understanding that the issue of full practice authority for nurse practitioners is an issue of consumer access to health care, the Dashboard map showing progress in this area has also been reconfigured. The revised map now distinguishes between states which have made incremental, or relatively minor improvements to increase consumer’s access to care, versus states which have made more substantial progress (view definitions).

Other Dashboard indicators that we updated, but show only minor changes, include national measures on interprofessional collaboration, workforce data, and diversity.