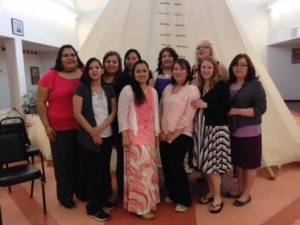 The first class of the licensed practical nursing program at Blackfeet Community College graduated in May 2014. The school recently added an associate’s degree in nursing program.

Montana has a serious shortage of Native American nurses.

The Campaign for Action’s state Action Coalition in Montana is taking steps to address the obstacles many Native Americans face to becoming nurses. Those barriers include family obligations, discriminatory treatment in nursing schools, and a lack of tradition of pursuing higher education, according to Casey Blumenthal, RN, Montana Action Coalition co-lead and vice president of MHA – An Association of Montana Health Care Providers.

“Native American nurses understand better the family and cultural needs of Native American patients and can be much more helpful in navigating the health care system,” Blumenthal said.

The Montana Action Coalition is conducting a needs assessment with tribal representatives from nursing programs across the state to learn about the resource and educational needs of Native American students. The results will form the basis of a diversity plan and best practice toolkit to increase Native American nurses in Montana and perhaps elsewhere.

One promising approach is the “Caring for Our Own Program” (CO-OP) at Montana State University (MSU), which includes a support group for students to meet with Native American faculty to discuss challenges.

CO-OP also provides tutors for students and runs a cultural immersion program for nursing faculty to educate them about the unique needs and obstacles of Native American students.

Kellie Phillips, an MSU College of Nursing student and member of the Cheyenne River Sioux Tribe in Eagle Butte, South Dakota, feels she benefited from the CO-OP program.

“The CO-OP program gave me a great foundation,” she said. “It offers so many resources and the staff and faculty truly want you to succeed. I think the support system they offer helps students most of all—they were like my family.”

Another program at Blackfeet Community College graduated its first class of licensed practical nursing students in 2014, and the college recently added an associate’s degree in nursing program. In the past, students there could only take prenursing coursework, and traveled to other schools to get a nursing degree. Because the college is located on the Blackfeet reservation, its nursing program may be more appealing and easier for Native Americans to attend because they can stay near their families, Blumenthal noted.

The Action Coalition is working hard to meet the Institute of Medicine’s goal for 80 percent of the nursing workforce in Montana to have a bachelor’s degree in nursing by 2020. Blackfeet Community College is one of the two tribal college partners in the statewide effort to create a seamless pathway for their students’ progression. Montana was also recently awarded a grant from the U.S. Department of Labor to help improve pathways to academic progression in nursing education in the state.

The Action Coalition also plans to create materials to highlight nursing to the next generation of Native American nurses.

“Our target audiences are anyone in high school or college to encourage and inspire them to look at nursing as a career option,” Blumenthal said. “When you drop a pebble in the pond, there is a ripple effect. Our focus is on keeping this visible for people. We believe all of these efforts will help reach the call of encouraging more Native Americans to enter nursing.”

This story appeared in the April 2015 issue of Advancing Health: News from the Campaign for Action.