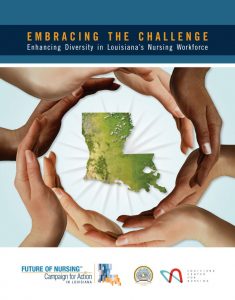 A new report details the current demographic makeup of Louisiana’s nursing workforce, challenges faced in increasing minority representation and actions that can be taken to recruit and retain minorities.

“Our ultimate goal is to have a nursing workforce in Louisiana that mirrors the demographic makeup of our residents,” said Cynthia Bienemy, PhD, RN, director of the Louisiana Center for Nursing, LAC co-lead and author of the report. “During our Diversity Think Tank we specifically looked at nursing education, nursing practice and nursing leadership in terms of increasing diversity. The report includes challenges and recommendations that came from those discussions.” 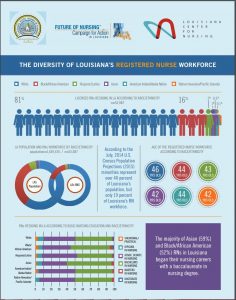 Ecoee Rooney, MSN, RN-BC, director of Nursing Professional Development and Evidence-Based Practice at Ochsner Medical Center in New Orleans, LA, served as facilitator for the Leadership Breakout Sessions. Rooney said, “Facilitating the Nursing Diversity Think Tank was such a valuable experience for me. As I moved from group to group throughout the day, some commonly-held themes emerged and a great deal of important discussion took place.”

The Future of Nursing: Campaign for Action, is mobilizing a nationwide network of 51 coalitions representing nurses and other healthcare providers, consumers, businesses, payers and other interested stakeholders working nationwide to transform healthcare through nursing. Led by the Robert Wood Johnson Foundation and AARP, the Campaign is driven by the evidence-based recommendations from the Institute of Medicine (IOM) 2010 report, The Future of Nursing: Leading Change, Advancing Health. One of the goals of the Campaign and of LAC is to prepare a diverse nursing workforce that will provide culturally competent care in a variety of settings to an aging and more ethnically diverse population.

“This diversity report gives us concrete information and actions that can be taken to increase nursing workforce diversity in our state,” said Barbara Morvant, MN, RN, Louisiana Action Coalition Leadership Steering Committee lead. “It brings together what we know and what we must do to change the face of nursing in Louisiana.”

The report and accompanying infographic are available at the Louisiana Action Coalition website: louisianafutureofnursing.org.