In a new report, the Institute of Medicine cites “significant progress” made over the last five years in implementing its 2010 recommendations about the future of nursing, while highlighting new and remaining challenges. Woven throughout the updated recommendations is a common thread: the need for the Future of Nursing: Campaign for Action to expand its efforts beyond the world of nursing. 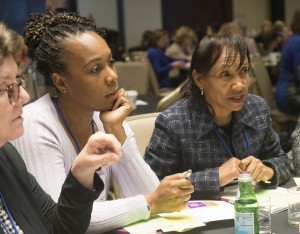 Action Coalition members exchange ideas on the new recommendations and how to best promote a Culture of Health.

The first report, The Future of Nursing: Leading Change, Advancing Health, also sponsored by the Robert Wood Johnson Foundation (RWJF), provided evidence that the nation can best meet its fast-changing health needs with a nursing profession strengthened on multiple fronts, and listed recommendations to help accomplish that. In a December 4 webinar, the Institute of Medicine (IOM) announced its findings on the progress that has been made on those goals. A week later, the president of the National Academy of Medicine, Victor J. Dzau, MD, and three experts from the 12-member review committee spoke of their assessment at the Campaign’s national meeting.

The 2010 study gave rise to the Campaign, an initiative of  AARP Foundation, AARP, and RWJF that coordinates efforts to implement the recommendations. Speaking to Campaign leaders at the Summit, Dzau named three themes that the IOM suggests should now drive their work. The Campaign should:

In a statement, RWJF President and CEO Risa Lavizzo-Mourey, MD, MBA, said: “This report underscores the importance of a diverse workforce of nurses who work to their full potential. While we are making progress toward that goal, there is more to do, and we look forward to collaborating with the business, education, nonprofit, and other sectors to position nurses to maximize their impact.”

Said Susan C. Reinhard, PhD, RN, FAAN, senior vice president and director of AARP’s Public Policy Institute and chief strategist at the Center to Champion Nursing in America, which coordinates the Campaign: “A strong nursing workforce is critical to helping people achieve health security and live their best lives, and at AARP, we agree with the committee that consumers need and deserve access to the high-quality care that nurses provide.”

The new recommendations—as with those in the 2010 report—are directed not only at the Campaign and nurses but also at policymakers, payers, and other health professions.

The new, 191-page document credits the Campaign as being a catalyst for new activities and for accelerating trends that had started, while urging greater focus in the areas of scope of practice, education, diversity, and workforce data. It also cites a new category—“collaborating and leading in care delivery and redesign”—that synthesizes two recommendations from the original report, reflecting that, as the report says, “True interprofessional collaboration can be accomplished only in concert with other health professionals, not within the nursing profession alone.”

The progress report can be found online. A few points worth noting:

At the Summit, summarizing the Campaign’s progress, committee member Thibault said: “The first five years have been enormously successful. It has been appropriately largely inward looking, to galvanize the nursing community. In the next five years, because of the success you’ve already had, and because of the changing context of health care today, we think the effort has to be more outward looking and more engaging of broader constituencies.”

This story appeared in the February 2016 issue of Advancing Health: News from the Campaign for Action.