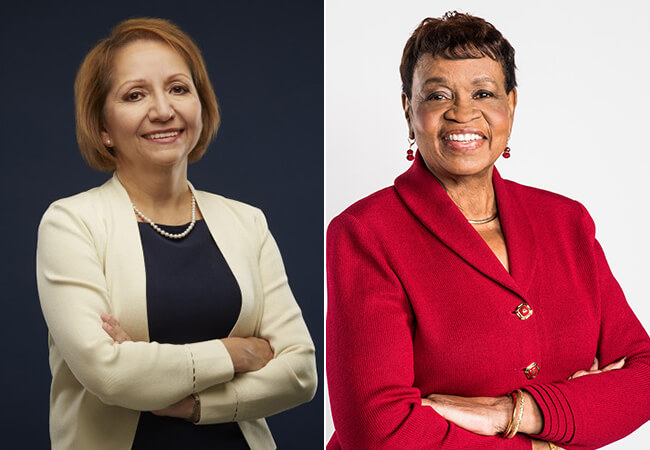 At its October conference, the American Academy of Nursing (AAN) recognized two nurse leaders who are also friends and champions of the Future of Nursing: Campaign for Action, an initiative of AARP Foundation, AARP, and the Robert Wood Johnson Foundation, for their “outstanding contributions to improve care, advance health equity, and promote the nursing profession.”

Antonia Villarruel, PhD, RN, FAAN, professor and Margaret Bond Simon Dean of Nursing at the University of Pennsylvania School of Nursing, received the Academy’s Health Care Leader Award, which “recognizes an influential national leader dedicated to improving the health of the nation through contributions to organizational excellence.” Villarruel, a co-lead of the Campaign for Action’s Strategic Advisory Committee, was recognized for her work improving the health of under-resourced Latino communities. Dr. Villarruel’s resume is deep and rich. She is a bilingual, bicultural nurse-researcher whose work spans clinical work in a children’s hospital, faculty roles at two universities, developing the widely-used intervention Cuídate (“Take care of Yourself”) for Hispanic teens, and advocating for health equity and diversification of the nursing profession. In addition to serving on the Campaign’s National Strategic Advisory Committee, she is a member of the National Academies of Sciences, Engineering and Medicine and directs World Health Organization (WHO) Collaborating Center for Nursing and Midwifery Leadership at Penn Nursing.

The Academy is presenting its Lifetime Legacy Award to Catherine Alicia Georges, EdD, RN, FAAN, Chairperson of the Department of Nursing at Lehman College of the City University of New York. The award recognizes “an extraordinary individual who has dedicated their life to advocating for positive health system changes.” Georges has been a strong supporter of the Center to Champion Nursing, an initiative of AARP Foundation, AARP, and the Robert Wood Johnson Foundation as well as the Campaign for Action. Georges previously served on the AARP board and as AARP’s national volunteer president from 2018-2020. The Academy cited her commitment to eliminating disparities and improving the health of minorities and the disadvantaged in the communities around her, her advocacy for community health and her ongoing mentoring of nurses to achieve greater health equity.