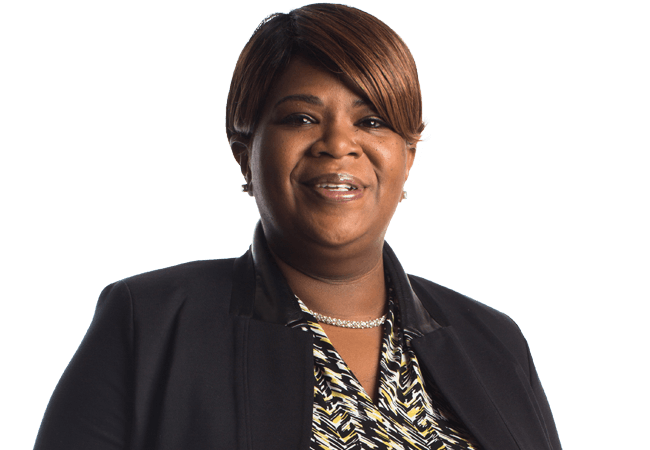 Elliott is an RWJF Interdisciplinary Research Leader (IRL) and the executive director of Gwen’s Girls, an organization founded by her late mother to empower girls in Allegheny County ages 8-18 through holistic, gender-specific programs, education and experiences.

Gwen’s Girls offers an after-school and summer program that seeks to empower girls. More than 98 percent of the girls who participate are black, 95 percent live in single-parent households, and 90 percent live in neighborhoods that are economically disadvantaged and marred by violence and drugs.

It also offers a STEM initiative, career exploration and workforce readiness, with an emphasis on exposing girls to STEM-related careers, which can provide financial stability. Elliott often touts the benefits of pursuing a nursing career, which changed her own life.

“I often say that I am the ‘original Gwen’s Girl’ because I come from the same communities and single-parent household as our girls,” Elliott says. “Nursing changed my life.”

Each girl who enters the program receives an assessment and an individualized plan to help her succeed, as well as an opportunity to receive mental health services. “We assess and plan around their academics, their families, and their social and health needs,” Elliott says. “If their families are food-insecure or have housing issues, that’s going to affect the girl, so we’ll address that.”

Nationally, black girls are three times as likely to be referred to juvenile justice court than white girls. Research shows that black girls are more likely than white girls to experience harassment and abuse, and Elliott and her IRL colleagues Sara Goodkind, PhD, MSW, an associate professor at the University of Pittsburgh, and Britney Brinkman, PhD, an associate professor at Chatham University, postulate that some of the behavior that gets black girls referred to juvenile court arises out of attempts to protect themselves. They also hypothesize that the behavior may be expressions of frustration with adults who mistreat them or dismiss them, as well as with a lack of resources and opportunities. Research has also shown that much of the differential treatment of black girls in the justice system is the result of implicit biases.

A Program to Empower Girls

In 2015, Elliott started the “See the Best in Me Program,” an initiative focused on the development of healthy self-esteem, critical thinking, and advocacy skills that will enable girls to better understand and express themselves about the issues that affect them daily. The program partners with community organizations to help the girls to develop advocacy skills, learn about civic engagement, social justice, restorative practices, and community activism. During the 2015-2016 fiscal year, every participant advanced to the next grade level, 98 percent did not become pregnant, and 90 percent did not become involved in the juvenile justice system.

For their IRL project, Elliott, Goodkind, and Brinkman are studying whether the “See the Best in Me Program” can prevent violence and improve the girls’ health. RWJF’s IRL program is a leadership development program for teams of two researchers and one community partner. Each team participates in leadership training and building new networks, as well as designs a project to improve health and equity in their community.

Elliott, Goodkind, and Brinkman’s research will also assess whether the program can shift narratives about black girls; they are including the girls’ perspectives as part of their research.

They expect their research will show that the “See the Best in Me Program” can serve as a model in violence prevention and health promotion interventions with black girls and other marginalized youth.  Elliott would like to see the program “replicated in other cities, states, and maybe even countries,” adding that she wants to “make systemic policy change.”

From an early age, Elliott watched her mother, Gwen, as one of the first women police officers in Pittsburgh, improve the lives of people in her neighborhood. Her mother was a founder of the Center for Victims, a community organization that provides services to crime victims, and she wanted to start an organization for girls to get them to believe in themselves and reach their full potential. Elliott’s mother realized her dream when she opened Gwen’s Girls after her retirement in 2002.

“I understood early on what it meant to help people, and caring for others is part of who I am,” Elliott says. “All of us need to help one another.”

That desire led Elliott to a career first as a victim’s advocate and then as a psychiatric nurse. She’s treated veterans for mood disorders at the Veterans Affairs Pittsburgh Healthcare System and offered services to a broad array of clients through her private practice. After her mother passed away in 2007, Elliott served on the board of Gwen’s Girls.

When the executive director position opened up in 2015, Elliott found her true calling.

“Everything in my life prepared me for this position,” she says. “I brought my background as a nurse, social worker, and community member.”

Shortly before Elliott became the executive director of Gwen’s Girls, the organization collaborated with local universities, including the University of Pittsburgh and Chatham University, to form the Gwendolyn J. Elliott Institute to support research, provide training, and serve as a clearinghouse for best practices in research and programming that empowers young girls and women.

As one of the few organizations that was addressing the needs of black girls, Gwen’s Girls frequently received requests from researchers to conduct studies. “They would collect the data, but the results were not coming back to us or the community about what we could do to improve what we were doing with the girls,” Elliott recalled.

Elliott expanded the Institute’s work to include child welfare and education. The Institute offers trainings and professional development to policy-makers and educators.

A Call to Action: Addressing Inequities

In 2016, Elliott helped to convene 200 experts from the education, child welfare, health care, and juvenile justice fields for a Black Girls Equity Summit. The FISA Foundation, in partnership with the Heinz Endowments, commissioned Snapshot: Inequities Affecting Black Girls in Pittsburgh and Allegheny County to showcase the gender and racial disparities facing black girls in the Pittsburgh region. The report was authored by Goodkind, Elliott’s IRL colleague. Nearly a dozen community partners provided input and data to spotlight barriers that affect the health, well-being and education of black girls.

Elliott then organized four workgroups that meet monthly to collaborate on addressing inequities in health and wellness, school pushout and discipline, child welfare, and juvenile justice.

She credits the IRL program with helping her to navigate the collaboration between community organizations, government, and community members. It has also helped her to engage with the media and network with other leaders and to share ideas about violence prevention and empowerment programs for youth, she says.

Elliott intends to advocate for girls for the duration of her career. “We need to change our culture,” she says. “Women can be anything they want, and…I want to fight for that equality.”