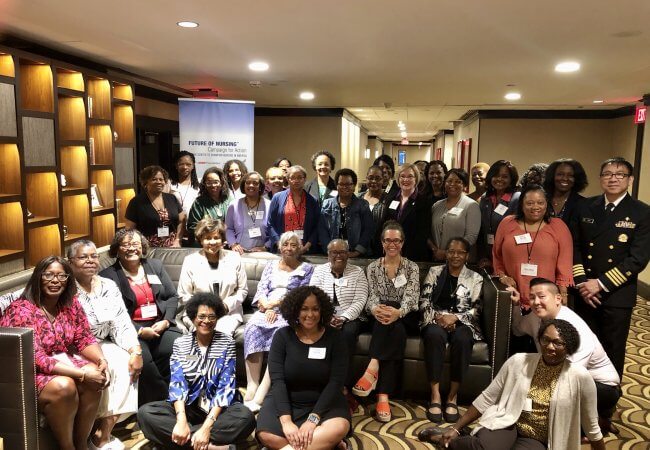 The Center to Champion Nursing in America (CCNA), an initiative of AARP Foundation, AARP, and the Robert Wood Johnson Foundation, runs the national Future of Nursing: Campaign for Action. The Campaign, which seeks to build a healthier America through nursing, works with numerous stakeholders in support of mentoring programs at nursing schools that serve primarily students of color.

A top Campaign goal is to help our nation achieve health equity, and one route is by creating a more diverse nursing workforce that reflects the communities it serves. The Campaign provides in-person and virtual technical assistance to nursing schools serving students of color and to our state-based Action Coalitions. The goals are to improve retention and graduation rates of minority nursing students, and increase the graduates’ passage rates of the National Council Licensure Examination (NCLEX), required to practice nursing.

CCNA provides this technical assistance in collaboration with several other stakeholders. They include the US Department of Health and Human Services’ Office of Minority Health (OMH), Health Resources Services Administration (HRSA); the White House Initiative of Historically Black Colleges and Universities; and dozens of schools of nursing. CCNA also works with several national nursing organizations, including the National Association of Hispanic Nurses, the National Alaskan Native American Indian Nurses Association, and Chi Eta Phi, a professional service organization for nurses and nursing students representing many cultures and ethnic backgrounds. We also plan to amplify the National Black Nurses Association’s mentoring program when that organization is ready.

Over the past several years, the Campaign has hosted several trainings, most recently at the White House Initiative on Historically Black Colleges and Universities National HBCU Week Conference in September 2019. The Campaign plans additional mentor trainings in late 2020 to mid-2021. One will be with Hispanic-serving institutions’ schools of nursing and another with Native American-serving nursing schools.

A more diverse nursing workforce helps achieve health equity in a number of ways. Evidence shows that health care providers who are members of racial and ethnic minorities are more likely to practice in underserved communities. A more diverse nursing workforce means that more Americans will have better access to care, including culturally and linguistically appropriate care.

Supporting efforts to increase the diversity of the nursing workforce also helps AARP, which houses the Campaign, achieve its goals of increasing its community presence and relevance with multicultural communities.

According to participant evaluations collected by the Campaign, the September training at the HBCU conference left the 90 attendees more knowledgeable about mentor training, eager to share what they learned and more connected as a network. The peer-to-peer engagement and networking opportunities between the Campaign’s state-based Action Coalitions and nursing leaders from the HBCUs were vital to helping them develop plans to move forward with mentor programs. Participants appreciated learning about potential funding opportunities from various federal agencies.

As a result of this training, promising collaborations and steps occurred.  For example, Maryland’s four HBCUs created a coalition to seek funding for a joint mentoring program. Also, the nursing school dean at North Carolina Agricultural and Technical State University introduced a local health system to mentoring tools used by the Campaign, including this report  and a Health Equity Toolkit. Cone Health is now piloting the toolkit into its mentoring model to help develop leadership skills of its registered nursing workforce.

To support the mentoring strategy, the Campaign has developed more tools to help the schools.

The Campaign hosts a virtual mentor training learning collaborative with the 29 HBCU schools of nursing and their associated Action Coalitions. These monthly virtual meetings allow the Campaign and OMH to provide technical assistance, peer-to-peer engagement and coaching on how best to implement their mentoring programs. We are developing a product to match prospective mentors with schools of nursing.

The Campaign publicly houses materials for mentor training on its website. Webinars, blogs and other resources, including a fundraising toolkit, are available for those interested in developing similar programs. Future features will include a survey for perspective nurses and non-nurses who wish to mentor a nursing student. View here

The efforts of the Campaign, as well as the other national drivers, have created a trend toward a more diverse nursing workforce. According to the Health Resources and Service Administration’s 2018 National Sample Survey of Registered Nurses, the numbers of Hispanic nurses nearly tripled in the last decade and the numbers of African American/Black nurses increased nearly 50 percent in that same time. Overall, the proportion of nurses of color grew from 16.8 percent to 26.7 percent of the overall nursing workforce since 2008.

To help the nursing workforce reflect the nation’s ethnic and racial diversity, more work is needed to bridge the gap. Mentoring programs, such as the one detailed here, are effective tools to achieve that goal.