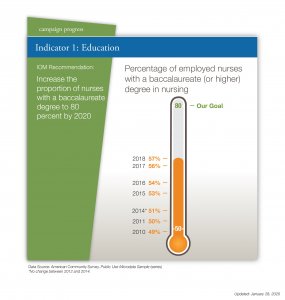 Since 2010, The Future of Nursing: Campaign for Action has tracked progress made as we continue to implement recommendations made by the Institute of Medicine’s 2010 future of nursing report,Leading Change, Advancing Health. New data are in, and the latest update to our dashboard shows a rise in both nursing education and diversity of employed nurses.

In addition, the Campaign’s work to diversify the nursing workforce is showing results. In 2018, more than 30 percent of the RN workforce in non-white. This is an increase from 2009 when nearly 24 percent of nurses were non-white.

You can view these updates and the full Campaign Dashboard here.