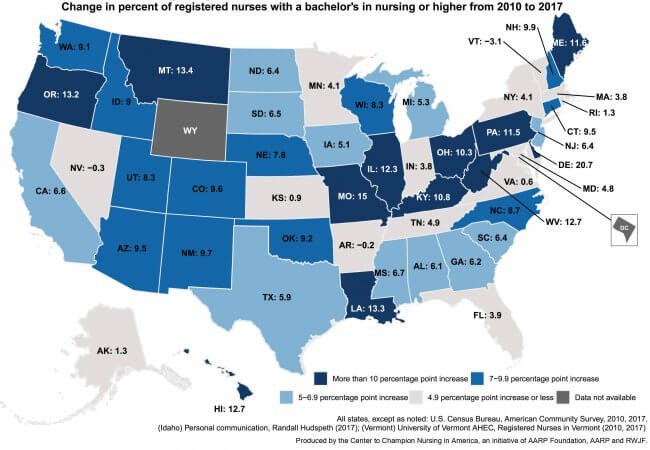 The percentage of registered nurses who hold a bachelor’s of science in nursing or higher is at an all-time high with a national average of about 56 percent, up from about 49 percent in 2010. The number shows that registered nurses are heeding the call to pursue higher levels of education, just as the Institute of Medicine (IOM) called for in its 2010 report on the future of nursing.

Produced by the Center to Champion Nursing in America for the Future of Nursing: Campaign for Action, both initiatives of AARP Foundation, AARP and RWJF, these new maps illustrate the significant growth in BSN-prepared nurses across the nation.

“The IOM set an audacious goal in 2010 that catalyzed an unprecedented movement in nursing education. These maps powerfully illustrate how employers, community colleges and universities, associations, nurses, nursing students, and others have worked together to ensure our nation has the more highly educated nursing workforce that it needs, and I applaud their efforts,” said Susan B. Hassmiller, senior adviser for nursing at the Robert Wood Johnson Foundation and director of the Future of Nursing: Campaign for Action.

“As the largest proportion of the health care workforce, nurses play a powerful role in helping people get and stay well. With research linking higher levels of education for nurses with safer, high-quality care, we will all benefit as more nurses heed the IOM’s call to pursue higher levels of education. These maps show how we are making history by ensuring that nurses, now more than ever, are better positioned to build a healthier America,” said Susan C. Reinhard, senior vice president and director, AARP Public Policy Institute and chief strategist, Center to Champion Nursing in America.

This new resource offers an overview of the successes in increasing the proportion of nurses pursuing higher education in each state. Action Coalitions can use these maps to celebrate the progress made in their state. Join us in spreading the word and highlighting the great work being done nationwide to build a more highly educated nursing workforce.

Note: These maps use American Community Survey data to depict the national trend. States who collect their own workforce data may find the state numbers in these maps may vary from their numbers, and therefore may prefer to continue to share their state-level data.

by Meredith Courville and Jordan Green