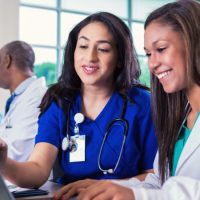 The Utah Action Coalition is integrally involved in an initiative to increase the number of nurses in the state. As an opinion piece in The Salt Lake Tribune recently reported, the Utah Nursing Consortium—which includes all the public nursing schools in Utah—aims to increase the graduation rate by 25 percent in three to five years.

Joan Gallegos, MSW, RN, is project coordinator of the state’s Action Coalition and a project manager at HealthInsight Utah, the coalition’s co-lead. Gallegos and Teresa Garrett, RN, DNP, APHN-BC, project director of the Utah Nursing Consortium, and many others from multiple disciplines spent the last few months gaining support for the effort and bringing on new partners. The need in Utah is enormous; businesses small and large, from home health agencies to hospital corporations, share the concern of having enough qualified RNs. As Gallegos writes, “We just got the business community on board through our chambers of commerce—after all, this is a business issue.”

The three nursing students who wrote the column are students of Garrett’s at the University of Utah College of Nursing. In their piece, they note the need: “Utah’s publicly funded nursing programs reject over 900 qualified applicants each year. This is because there is not enough funding to support faculty throughout the state.”