Texas Nurses Celebrate Accomplishments, Plan for the Future of Nursing

Great things are happening for nursing in Texas and much of the progress is thanks to the “Texas Team,” the state’s Action Coalition.  This month, the Texas Team held a day-long meeting to evaluate its progress, identify priorities for action, allow regional teams to learn from one another, and celebrate nurses. The Texas Team Annual Summit and Gala were held in Dallas on Wednesday, February 12. 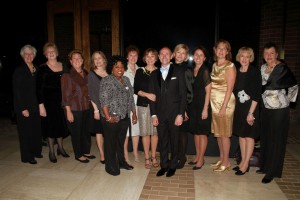 Nearly 250 nurses from across the state spent the day sharing their progress, discussing ways they could improve and strengthen their work, and planning next steps in their efforts to advance recommendations in the Institute of Medicine’s (IOM) report, The Future of Nursing: Leading Change, Advancing Health. Among the featured speakers at the summit were Susan B. Hassmiller, PhD, RN, FAAN, senior adviser for nursing at the Robert Wood Johnson Foundation (RWJF); Alexia Green, RN, PhD, FAAN, the founding co-lead of the Texas Team; Beverly Malone, PhD, RN, FAAN, CEO of the National League for Nursing; and a student nurse from Texas Christian University who decided to pursue a nursing career thanks, in part, to the Future of Nursing: Campaign for Action.

The hard work of the day was capped off with a gala reception and dinner, “The Promise of Nursing for Texas,” hosted by Johnson & Johnson.

The gala featured the premiere of “Lifeline,” a documentary produced by Johnson & Johnson to educate policy-makers and others about the vital role nurses play in improving health. It features the Big Sandy Medical Center, a health center run by nurse practitioners in Montana. The film includes commentary from nurse leaders including Hassmiller; Malone; Marla Salmon, ScD, RN, FAAN, professor of nursing and public health at the University of Washington; Susan Bakewell-Sachs, PhD, RN, PNP-PC,  former director of the RWJF New Jersey Nursing Initiative and now dean and vice president for nursing affairs at Oregon Health & Science University; and Peter Buerhaus, PhD, RN, FAAN, the Valere Potter Professor of Nursing and director of the Center for Interdisciplinary Health Workforce Studies at Vanderbilt University Medical Center. 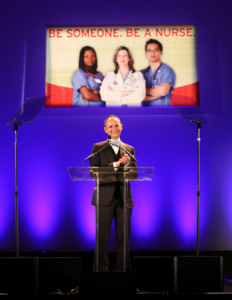 “Together, we are advancing the recommendations of the landmark IOM report on the future of nursing,” said Cole Edmonson, DNP, RN, FACHE, NEA-BC, an RWJF Executive Nurse Fellow and a new co-lead of the Texas Team. “As Sue Hassmiller says, ‘a report written not to be shelved, but to be lived!’ Tonight is a celebration of the nursing profession, but it is also a call to action—a call to take up the work of the nurses who came before us, like Florence Nightingale, Clara Barton, and Mary Seacole. The future of our nation’s health is at stake and that calls upon every nurse to take action on the report’s recommendations.”

Speakers at the gala included nurses and a nursing student who talked about their commitment to the profession, to their patients, and to advancing health care.

Diana Ruiz, DNP, RN-BC, CWOCN, NE, director of population and community health at the Medical Health Center Health System in Odessa, Texas, talked about her experiences traveling to Uganda and then to Haiti, where she helped provide care for earthquake victims. “In nursing, you find your passion and your love,” she said.

The evening ended with the assembled guests selecting the winner of the Johnson & Johnson Promise of Nursing video challenge. Andrea Higham, director of the Johnson & Johnson Campaign for Nursing’s Future, introduced the videos by the four finalists: Texas Tech Health Sciences Center School of Nursing, Saint David’s Health Care, Texas Team of North Texas, and the University of Texas Medical Branch at Galveston School of Nursing. Based on applause, the video “Our Stories” created by the Texas Tech team was named the winner.

The two events raised $372,000 for the Texas Team. That money will be used for grants to support the work of regional teams in the state, and for student and faculty scholarships.

This article originially appeared on the Robert Wood Johnson Foundation website. Link to the original article.