An Interview with Filmmaker Carolyn Jones, Director of The American Nurse 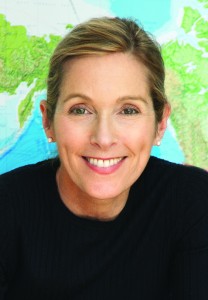 For most Americans, nurses occupy an abstract space, somewhere between “the person who takes my blood pressure” and “the voice at the other end of the nurse call button.”

Photographer and documentary filmmaker Carolyn Jones knows better.Much better. Jones, who trains her socially conscious lens on portions of society that deserve attention, interviewed and photographed 75 nurses across the United States as part of the American Nurse Project; what she learned forever changed her perceptions about the profession.

How did you become involved with the American Nurse Project?

Jones: Fresenius Kabi (a global health care company) wanted to develop a project that would celebrate nurses and shine a light on the work that they do. All of my work is focused on looking at the best in humanity, and nurses represent the very best, so I was thrilled to come onboard.

I had chemotherapy for breast cancer in 2005, and my nurse, Joanne Staha, knocked my socks off. I’ve always been fascinated by people who seem to have a sixth sense about humanity, and Joanne had that. So as soon as this opportunity arose, I jumped on it because of her. It gave me a chance to give something back to the profession. I wanted to create a book that honored the profession and opened the public’s eyes. I feel like it did that, but the book stayed primarily within the nursing community. So I decided to do a film that focuses on five nurses and their stories.

How do you think the public views nurses? 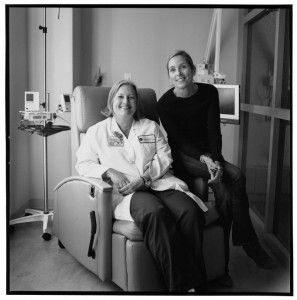 Book Cover of The American Nurse: Photographs and Interviews by Carolyn Jones.

Jones: Most of us have no idea of the depth of knowledge that nursing requires. Nurses have a unique ability to find solutions. They’re like MacGyver—they can go in there and fix something with a paperclip! We think that all nurses do is take our temperature and our blood pressure, or hold our hand and comfort us while we’re waiting for the doctor to show up. But we’re missing the boat. This has never been doctors vs. nurses; its doctorsplus nurses. It’s a team, and I don’t think we as the public see it that way.

It’s hard to convey the value of nurses, because no one really wants to talk about the realities of the work. You don’t go out to dinner and hear a nurse talk about her day—first, because of HIPAA (the federal Health Insurance Portability and Accountability Act that protects patients’ privacy), and second, because nobody wants to hear about where she had her hands that afternoon. It’s dark stuff.

How did you identify the nurses you interviewed?

Jones: I didn’t want to just meet random nurses. So we would find a medical facility and then ask them to nominate the finest nurses they had, nurses who could not only answer the questions but also represent the profession. I wanted to call it The American Nurse, so I needed to include nurses from across the country and look at the profession through their eyes. I interviewed nurses caring for miners in the Appalachian Mountains, home health workers, nurses in the most populated hospital and the least populated state. I wanted to understand nursing from the viewpoint of returning war veterans, so we went to the VA hospital in San Diego. We also wanted to include an area that had gone through a major tragedy, which took us to New Orleans.

What did you learn about nurses that surprised you? 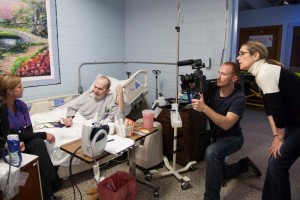 Director Carolyn Jones and Cinematographer Jaka Vinsek capture the scene as Tonia talks to one of her high-security hospice patients at the Louisiana State Penitentiary.

Jones: Everything! Every day I found out how much I don’t know.

One was a total lack of veneer. They’re capable of giving an enormous amount of themselves very quickly. It gives them the ability to be present in a way that the rest of us haven’t developed. I found over and over that nurses would talk about something personal—the death of a parent or child, or an illness they suffered—and they were able to translate it into something to make nursing better.

And I learned that nurses are incredibly brave! They have no fear—they can’t, because what the patient is going through in that moment is much more important. I watched nurses stick their hands in places I couldn’t believe, and I kept thinking, “How do you do that?” Somebody’s arm could be falling off, and a nurse can go in there and deal with it calmly. Frankly, that’s what we need when we’re sick or dying, when there’s a tragedy and mayhem. We need someone who can come in and not be daunted by the blood and the guts and the fear.

Another fascinating trait is that nurses are trained to be nonjudgmental. I met with a nurse who was doing end-of-life care in a maximum-security prison in Louisiana—the largest in the country. A patient told me that he had shot his wife, and the nurse didn’t flinch; she cared for him as though he were a family member. I was fascinated by her ability to care for everybody no matter what. It’s such an incredible gift to be able to piggyback on that way of looking at the world.

I think nurses are constantly aware of how fragile life is, so they understand and appreciate it more than most.

What do you think is needed to advance the nursing profession? 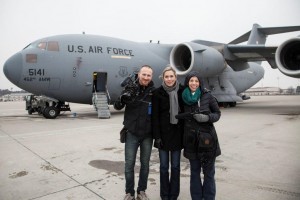 Cinematographer Jaka Vinsek, Director Carolyn Jones and Producer Lisa Frank in front of a military aircraft at Ramstein U.S. Air Base in Germany.

Jones: Nurses need to be part of every conversation about health care because they see things holistically. They’re motivated by just one thing, and that’s caring for the patient. They’re in a very special position, and that—coupled with their vast understanding of how we tick as human beings—makes them valuable in these settings.

I wish we could listen to their opinions more, and place more value on their views about everything from birth to death, including our health care system. But first we have to help the public see who nurses really are.

If you had to choose one word to describe nurses, what would it be?