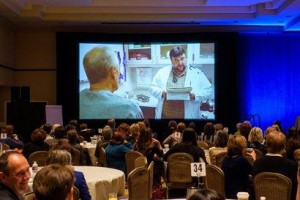 In 1943, Robert Wood Johnson, the renowned former chair of the Johnson & Johnson family of companies, wrote a corporate Credo that opened with a statement that said the company’s “first responsibility” is to the people who use its products and services.

That responsibility, he wrote, extends to nurses—a commitment to the profession that is literally etched in stone in a large block that stands in the lobby of the company’s corporate world headquarters in New Brunswick, NJ. In the decades since, the company has more than lived up to that commitment as one of the nation’s strongest supporters of nurses and nursing.

In 2002, in response to reports of a dire shortage of nurses, James Lenehan, the company’s corporate vice chair at the time, pulled together a group of people to figure out how to boost interest in nursing and support the profession, according to Andrea Higham, the company’s director of corporate equity. “We’ve been able to rebrand certain products of ours, like BAND-AIDs and TYLENOL,” Lenehan, the son of a nurse, told the group. “Is there any way to rebrand nursing?”

The answer was an enthusiastic yes. That year, Johnson & Johnson launched the Campaign for Nursing’s Future, a $50 million national initiative that promotes nursing, encourages people to become and remain nurses, and improves nurse faculty recruitment and retention.

The campaign does that in a variety of ways, including a recently released documentary film that aims to raise awareness about the transformative role nurses are playing in health care. The film showcases nurses playing new and critical roles in health care delivery and features interviews with numerous nurse leaders. Other campaign components include strategic messaging, scholarship programs, and a comprehensive website with nurse-related information and resources. A forthcoming video series will address career development for nurses. 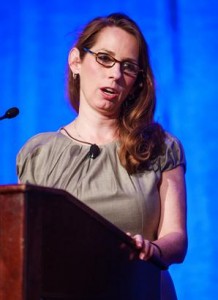 Andrea Highham of Johnson and Johnson speaks the the 2014 Summit

The company’s support for nurses doesn’t end there. It has teamed up with the American Association of Colleges of Nursing to help minority nurses become faculty. It is a strong supporter of the Future of Nursing: Campaign for Action, a joint initiative of AARP and the Robert Wood Johnson Foundation (RWJF, the health care philanthropy founded by the same man who wrote the Johnson & Johnson corporate Credo) that is working to transform the nursing profession to improve health and health care. And it supports RWJF’s Future of Nursing Scholars program, which is helping create a diverse cadre of PhD-prepared nurses.

Johnson & Johnson is a member of the Campaign’s Champion Nursing Coalition, a group of non-nursing organizations that provide advice and support. And earlier this year it underwrote a fundraising gala for the Texas Team Action Coalition—a statewide coalition working to advance health care through nursing—that raised more than $130,000 for programs focusing on improving nursing education and nursing practice in the state.

The Campaign is proud to call Johnson & Johnson a partner and to recognize it as a true Champion for Nursing.

This story appeared in the February 2015 issue of Advancing Health: News from the Campaign for Action.