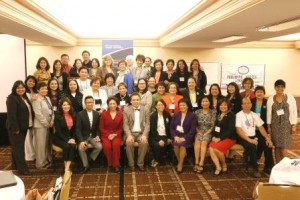 Members of the Florida Action Coalition and the Philippine Nurses Association of America Northeast Florida with their president, Dr. Leticia Hermosa, following their recent roundtable discussion.

No two words more accurately describe the nation’s nursing profession. A full 83 percent of nurses are white, and about 90 percent are female.

In a world of fast-changing demographics, many recognize those statistics need to change and that our nation needs a nursing workforce that is more representative of the people it serves.

That’s why creating and fostering a more diverse workforce of nurses that reflects America’s demographics, provides culturally competent care, and contributes to reducing health disparities that exist between different groups is a key goal of the Future of Nursing: Campaign for Action, a joint initiative of the Robert Wood Johnson Foundation (RWJF) and AARP. The Campaign is working to implement recommendations from the Institute of Medicine’s (IOM) landmark 2010 report on the future of nursing.

Health care disparities are inequalities that occur in health care access and quality among different racial, ethnic, and socioeconomic groups. Despite years of efforts to address disparities, the fact remains that certain ethnic and racial groups in the United States receive lower quality health care than others and suffer from worse health—regardless of their health insurance coverage, their income, or where they live.

“One intervention is to have health care workers who are more representative of the people that they serve,” said Winifred V. Quinn, Ph.D., director of advocacy and consumer affairs for the Center to Champion Nursing in America, a joint initiative of AARP, AARP Foundation, and RWJF.

Because nurses make up the largest part of the health care workforce, it is particularly important that they reflect the diversity of the people they care for. Nurses can help create a Culture of Health and provide culturally competent care—or care that is tailored to meet the needs of people with diverse behaviors, beliefs, and values, including their social, cultural, and linguistic needs—that can reduce health care disparities. For example, studies show that when clinicians speak the same language as their patients or are sensitive to cultural differences, there are better health outcomes, Quinn noted.

To address the diversity needs in nursing, the Campaign is taking several steps. Among them, it is providing assistance to its 51 state Action Coalitions in creating diversity plans to address their health care challenges and demographic needs. The Action Coalitions work at the local and state level to transform nursing practice and policy to reflect the needs of the 21st century.

Many Action Coalitions are focusing their diversity work on one or two of the IOM report’s recommendations, said Adriana Perez, PhD, who advises the Campaign on diversity efforts and is an assistant professor at Arizona State University and president of the largest chapter of the National Association of Hispanic Nurses.

For example, the Wisconsin Action Coalition developed a plan to infuse diversity by building partnerships with minority nursing associations and other diverse stakeholder groups. They also hosted a statewide conference focusing on the need for greater diversity in the nursing workforce in partnership with the Wisconsin Center for Nursing. In addition, two nurse researchers at the University of Wisconsin Oshkosh College of Nursing developed a tool to assess, monitor, and evaluate the status of diversity within nursing education programs, health care systems, and other organizations.

Florida’s Action Coalition, meanwhile, brought together diverse nurse leaders from across the state for a diversity think tank in fall 2014. Participants worked to find common ground to fuel and direct nursing policy on diversity and developed strategies to increase the number of diverse nurse leaders in Florida. This spring, the Florida Action Coalition hosted a roundtable to further develop and disseminate these strategies gathering input from members of the Philippine Nurses Association of America Northeast Florida. They will be adopting and implementing a diversity action plan later this year.

“I am hopeful that these collective efforts will help us end up with a workforce that better reflects the diversity and richness of our nation,” Perez said. “We are learning from past efforts, the existing evidence, and building a momentum that I have not felt before. I envision we will make a lasting impact.”

This story appeared in the April 2015 issue of Advancing Health: News from the Campaign for Action.